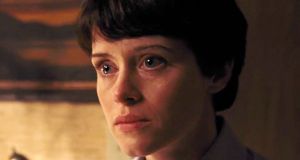 FIRST MAN ★★★★
Directed by Damien Chazelle. Starring Ryan Gosling, Claire Foy, Jason Clarke, Kyle Chandler, Corey Stoll, Patrick Fugit, Christoher Abbott, Ciarán Hinds, Olivia Hamilton. 12A cert, general release, 141 min
Fine study of Neil Armstrong from the director and star of La La Land. The film is great on the sensual assault of space travel, but it is most notable as a character study. Who better to play such a famously unknowable character than the perennially blank Gosling? Foy will get more demanding roles in her career, but she may be relieved that her dreaded “wife part” is more fleshed out than is usually the case. Spectacular, but also intimate. Full review/trailer DC

Working from a script by Roddy Doyle, Breathnach gives us a troubling, moving study of how homelessness now functions. Greene and Dunford are super as a couple flung into a hotel when their landlord sells up. Rosie is claustrophobic throughout, but Doyle’s durable humanism does provide some light in the darkness. The mechanism of society has become clogged, but the film wastes no time blaming those who merely maintain the cogs and levers. Full review DC

Ostensibly, this is a movie in which logger Red (Cage) exacts a terrible (but appropriate) revenge against a Manson Family-like religious cult and their cannibal biker cohorts from hell (actual hell) – we don’t wish to spoil these adversaries, but wow! – after they have abducted his girlfriend Mandy (Riseborough). Any summary ignores the incredible textures in the film. Cheddar Goblin Macaroni, anyone? It’s fascinating to observe Cage snake his way in and around the 1980s largesse of the project. As Roache’s creepy man-child leader has it: “You’re a special one, Mandy.” TB

Two strangers arrive in a small Hungarian town in August of 1945, thereby kicking off a community-wide panic in this monochrome drama. Cinematographer Elemér Ragályi’s elegant black-and-white tableaux and the heavy historical subject matter can’t quite compensate for a frantic, cluttered script that demands so many comings-and-goings, at times it could be mistaken for an episode of ’Allo ’Allo. But Török’s engaging, if cluttered feature has important and timely things to say about historical guilt and remembrance. TB

A triumphant return to an indestructible Hollywood warhorse. Gaga exceeds all expectations as the talented working-class ingenue propelled to fame by Cooper’s soused rocker. Leaning into the male lead like a bird investigating promising movements among the undergrowth, she is exotic when she’s ordinary and rooted when she’s fantastic. Cooper is equally strong – browned to the colour of yesterday’s tea – as a decent man laid low by addiction. The music is great. The nimble camera-work is a pleasure. What’s not to like? Full review/trailer DC

It seems only fair that modern architecture – including Eero Saarinen’s Irwin Union Bank building and the Miller House and IM Pei’s Cleo Rogers Memorial Library – takes centre stage in debuting writer-director Kogonada’s carefully calibrated, minimalist drama. Taking cues from the clean, unfussy lines of those constructions, Columbus concerns a book translator (Cho) who finds himself stranded in the Indiana town of the title, where he befriends an architectural enthusiast (Richardson). Could pass as an American remake of a hitherto undiscovered Yasujiro Ozu drama. Full review TB

A gift from JK Rowling: A 34-part fairy tale, free online for children in lockdown
4

Is it okay to have children in a time of climate chaos?
6

Fintan O’Toole: Bono at 60 – Why is Ireland so ambivalent about its most famous son?
9