Year in Culture Review: From Lady Bird to A Star is Born, here are our films of the year 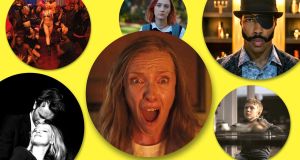 We should begin by acknowledging the continuing eccentricities of the distribution business. For once there was, in this place, only the mildest of eye gouging in the argument over what should be named best film of 2018. Andrey Zvyagintsev has been honing a considerable talent since the release of The Return in 2003. Loveless, in which a ghastly Russian couple grudgingly search for their missing son, can make a claim to be his best film yet. It is wide in scope, savage in its satire, bitter in its humour and features one of the most heart-rending shots in cinema history.

But didn’t you first read about it in The Irish Times a year and a half ago? You did. Loveless won the Jury Prize at Cannes in May of 2017. It took another seven months to make it to Irish cinemas. In some ways, Greta Gerwig’s wondrous Lady Bird – never in doubt for our top 10 – feels even older. The recipient of five Oscar nominations registers here as talk about the 2019 Oscars reaches uncomfortable volume. Expect us to be saying similar things about Yorgos Lanthimos’s The Favourite in a year’s time.

Meanwhile, Netflix is accelerating the release process to a dizzying pace. A very few prestige releases get a week or two in cinemas before arriving on that streaming service. A few more get day-and-date releases. Most go straight to your computer. If Alfonso Cuarón’s lovely, technically dazzling Roma – playing in a few cinemas this month – wins best picture, the conventions of distribution may finally shift.

We are happy to report a reasonable degree of diversity across our choice for the 50 best pictures of the year. Five of the top 10 are still American, but those films could hardly be more different. Panos Cosmatos’s Mandy delivered us back the right Nicolas Cage in a gloriously decadent thriller that broke new ground in the field of millennial psychedelia. Boots Riley’s Sorry to Bother You wittily dismantled the US’s current racial hypocrisies. Chloé Zhao’s The Rider, a neo-realist tale of the fading west, was sufficiently well received to win its director an unlikely berth in the Marvel Cinematic Universe.

Then there was the divisive Hereditary. The Irish Times was blown away by a film that combined a serious dissection of the grieving process with an occult plot that Dennis Wheatley might have enjoyed. A boom in quality horror is afoot (ignore those bores who utter the words “horror for people who don’t like horror”). A boom in quality is always afoot. Few would have guessed that A Quiet Place, the directorial debut from actor John Krasinski, would be among the best-reviewed films of the year, but that high-concept horror deserved the mighty praise thrown in its direction.

And there is an Irish film in the top 10: Feargal Ward’s fascinating, original The Lonely Battle of Thomas Reid. Another solid year for domestic cinema also took in such varied treats as Donal Foreman’s eccentric documentary The Image You Missed; Ross Whitaker’s Katie, a study of Katie Taylor; and Frank Berry’s searing prison drama Michael Inside. We have got a little spoiled over the past few years and we get a bit moody if no Irish films are challenging for Oscars. But the national project is continuing apace.

For the first time (somewhat mischievously and occasionally arbitrarily), we have ranked our favourite 50 films in order. Those expecting to see a host of box-office behemoths will, alas, be disappointed. It seems likely that Black Panther, one of two massively successful Marvel products in 2018, will secure a best picture Oscar nomination, but that was not the Michael B Jordan project that troubled our scorers. Black Panther is an efficient machine. It marks a cultural advance. But Steven Caple jnr’s Creed II was tidier, better-structured and more emotionally honest. It will also make a lot of money, if not quite so much as the other Jordan joint.

Mamma Mia! Here We Go Again didn’t make it into the 50 either, but two projects – the blubby A Star Is Born and the brash Bohemian Rhapsody – are there to attest the continuing appeal of the musically inclined entertainment (excuse the convoluted language, but neither is exactly a musical). If Rocketman, the upcoming Elton John biopic, is a smash, then expect much, much more material in this vein.

The mainstream will take care of itself. Jurassic World: Fallen Kingdom can bring in $1.3 billion without our help or without being much good. This list demonstrates that, despite the assault from streaming and despite shrinking funds for mid-budget projects, world cinema is still in a state of rude good health. Spike Lee is back with the angry BlacKkKlansman. Lynne Ramsay eats up the competition with the withering You Were Never Really Here.

What are you complaining about?

A boy runs away from home as his self-obsessed parents’ marriage implodes in Andrey Zvyagintsev’s incalculably powerful contemporary Russian tragedy.

There are not many films that attract blissful praise for their ruthless economy, but Pawel Pawlikowski’s Europe-trotting romance is notable as much for what it leaves out as what it includes.

Nicolas Cage exacts a terrible (but appropriate) revenge against a Manson Family-alike religious cult and their cannibal biker cohorts from hell (actual hell).

It’s Ingmar Bergman’s The Wicker Man! Not everybody was comfortable with such a combination, but Toni Collette’s turn as a bereaved woman seeing menace in every corner drew near-universal praise.

“The only thing exciting about 2002 is that it’s a palindrome.” Saoirse Ronan’s performance and Greta Gerwig’s direction contribute to an instant classic in the coming-of-age genre.

Gaspar Noé returns to the inner circle of hell with this wild, writhing piece of Tanztheater set to 1990s beats.

7 Sorry to Bother You

Yes, there is still a place for carefully wrought neo-realism. Chloé Zhao encourages a real badlands family to act out a tragedy of the new west.

10 The Lonely Battle of Thomas Reid

Frank Berry follows up I Used to Live Here with a striking Irish prison drama featuring a breakthrough turn by Dafhyd Flynn.

The year’s most under-rated British film? Siobhan Finneran is intense in a takedown of the Jehovah’s Witnesses.

15 You Were Never Really Here

Lynne Ramsay crashes back with a savage tale of retribution and restitution. Joaquin Phoenix excels.

Squabbling is a defining characteristic of Bohemian Rhapsody, which blazes through Freddie Mercury’s life in a series of agreeably cheesy vignettes. Rami Malek is absurdly impressive.

Fantastic film, more like. Daniela Vega is a trans woman grieving in Santiago.

You what now? Who? Where? Ingenious science-fiction puzzler rewards deep consideration.

Debra Granik shows sympathy for a father and daughter who shun everyday society.

Warwick Thornton’s gripping neo-western concerns a manhunt for an aboriginal stockman who has killed a vicious white veteran in self-defence.

Drago returns in this unexpectedly tender slant-sequel to Rocky IV. Brigitte Nielsen is on hand for “Oh, mummy!” drama.

29 The Image You Missed

Robin Campillo’s moving dramatisation of the Act Up Aids campaigns in 1990s Paris.

Charlize Theron blinks beneath the vomit in dark comedy about motherhood.

A rattling account of Neil Armstrong’s journey to the moon. Ryan Gosling straps in.

The Irish Times was sharply divided on Gaga and Cooper in Oscar-tipped remake. Currently 6/4 for best picture.

Charlie Plummer is astounding as a 15-year-old orphan who befriends a doomed racehorse.

Good fences make for good neighbours, but even Donald Trump’s wall couldn’t make a dent in the simmering feud at the black heart of this killer – literally and figuratively – Icelandic comedy.

Triplets are reunited aged 19 in Tim Wardle’s fascinating doc. But that’s only the beginning of their bizarre story.

Yep. You read that right. There’s a Transformers movie in the list. What of it?

A pre-schooler struggling with a new baby sister is visited by said sister from the future.

Paul Schrader gets Transcendental as a broken reverend (Ethan Hawke) begins a relationship with the widow of an environmental activist.

Effective, moving study of a homeless family from Paddy Breathnach and Roddy Doyle.