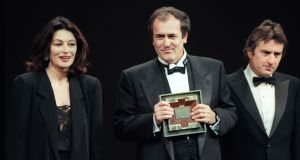 Forty-six years ago, Pauline Kael, the New Yorker’s influential film critic, did not hold back when heralding the debut of Bernardo Bertolucci’s Last Tango in Paris. “October 14, 1972 . . . should become a landmark in movie history comparable to May 29, 1913 – the night Le Sacre du Printemps was first performed,” she wrote.

Reputations shift. Bertolucci, who has died in Rome aged 77, will be remembered as one of the great Italian directors of the post-war period. A protege of the rigorous film-maker Pier Paolo Pasolini, an admirer of the extravagant Federico Fellini, he developed a cinema that combined intellectual experiment with visual flourish. But Kael’s view will be reflected in few of today’s obituaries. Its reputation marred by ugly stories concerning the mistreatment of actor Maria Schneider, Last Tango now seems like a pretentious mangling of the previous decade’s sexual and social advances. Nor will he be chiefly remembered for The Last Emperor, a beautiful but hollow epic that, on winning the best picture Oscar of 1987, helped confirm that award’s taste for meretricious grandiosity.

Bertolucci’s reputation rests on a series of brilliantly incisive, hypnotically composed films that rode the rising wave of European arthouse cinema in the late 1960s. Adapted from a novel by Alberto Moravia, The Conformist (1970) told a story of intrigue and subversion from Italy’s (then not so distant) fascist past. The film had a huge influence on the New Hollywood and, as Francis Ford Coppola has acknowledged, on The Godfather in particular.

Released the same year and originally made for television, The Spider’s Stratagem came at Italian politics through the lens of a Jorge Luis Borges story. Vittorio Storaro’s photography on both those films used darker shades to extraordinary and memorable effect. They remain key artefacts of a fecund era.

Bertolucci, whose maternal grandmother was Irish, grew up among talk of art and politics in Parma. His mother was a teacher, his father was a poet and film critic. Dad was friendly with Pasolini and that film-maker hired Bernardo to work on his influential debut Accattone (1961). The younger man slipped comfortably into the industry and became collaborator to many of the rising talents. His name later appeared beside those of horror master Dario Argento and western innovator Sergio Leone on the script for Leone’s Once Upon a Time in the West (1968). The three friends spent hours chatting about their favourite tropes from classic westerns while devising the story.

Bertolucci’s directorial career began with The Grim Reaper in 1962 and properly took off with the romantic drama Before the Revolution two years later. That last film dripped with the radical politics that characterised Bertolucci’s work throughout his high period. He was then a communist, but his views altered with the drift of history. “The end of communism changed the relationship I had with politics,” he later said. “Things became different, much less ideological. You can see that in my movies, which are all very much about myself in a certain era.”

The Conformist secured him an Oscar nomination for best adapted screenplay and established him in critical circles, but none of that prepared him for the furore surrounding Last Tango in Paris. Starring Marlon Brando as a morose American mourning his wife while seducing a much younger Frenchwoman, the film pushed boundaries with its sexual explicitness. In the UK, Mary Whitehouse led the unsuccessful campaign to have it banned (no such pressure was necessary in Ireland, of course.) Local councils were picketed. TV news reporters interviewed punters emerging sweatily from screenings. Meanwhile raves such as that from Pauline Kael elevated the picture to the status of ground-breaking masterpiece.

The prominence (not to say notoriety) of Last Tango in Paris allowed the director to gather a starry cast, including Robert De Niro, Gérard Depardieu, Donald Sutherland and Burt Lancaster, for his enormous saga 1900 in 1976. That film received some thumpingly bad reviews, but it stands as a demonstration of his ability to accommodate political theorising with epic storytelling.

The Last Emperor was certainly a notable achievement. Starring John Lone as Puyi, final ruler of the Qing Dynasty, the picture – produced by the indefatigable Jeremy Thomas (also an enabler for the recently deceased Nicolas Roeg) – was the first western production to be shot within Beijing's Forbidden City. Bertolucci succeeded where compatriots such as Fellini and Michelangelo Antonioni failed by securing that best picture Oscar. But it did not lead to many further glories. His later work included the fatty The Sheltering Sky (1990), the notoriously awful Little Buddha (1993) and interesting smaller pictures such as Stealing Beauty (1996) and The Dreamers (2003).

He remained a Grand Old Man of world cinema. In 2011, already using a wheelchair, he received the first ever honorary Palme d’Or at the Cannes Film Festival. From 1979 until his death he was married to the British screenwriter Clare Peploe, who helped create Antonioni’s Zabriskie Point.

Bertolucci will be remembered for being a vital creative force – sound on image and idea – back when film-makers were at the heart of the cultural conversation. Despite Kael’s comparisons to Stravinsky, Last Tango in Paris is now of largely historical interest. But The Conformist will survive as long as people watch intelligent films.