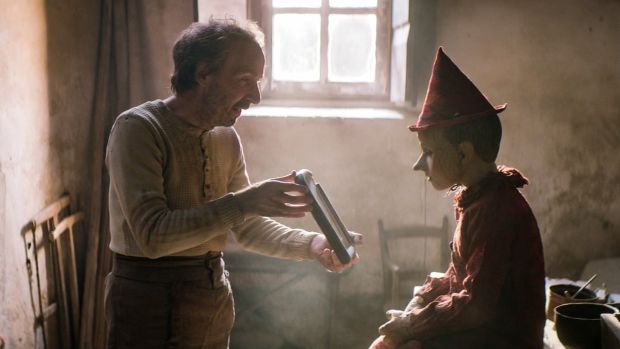 When Matteo Garrone’s Tale of Tales premiered at the 2015 Cannes festival, more than a few (hem, hem) grizzled critics shuddered at memories of the East German TV series The Singing Ringing Tree. Broadcast on British television in the 1970s, that ancient oddity – and, to an extent, Garrone’s anthology – made something deeply unsettling of ancient folk tales.

The director is at it again with his lush, elegant take on Carlo Collodi’s classic novel The Adventures of Pinocchio. One assumes Garrone is open to the notion of juvenile audiences – the 1883 book was aimed at that market – but parents would be wise to direct more fragile children elsewhere. This Pinocchio gets hanged by the neck from a lonely tree. He pleads for mercy before a terrifying monkey judge. Yes, there is a talking cricket (unnamed), but he’s closer to an LSD aberration than an amiable star of musical comedy.

Anglophone audiences have a peculiar relationship with Collodi’s tale. It is, by one measure, the most translated novel ever, and, having shifted 80 million copies, among the biggest-selling of all time. Yet few people in this country will have any connection to it beyond the 1940 Walt Disney film. Garrone’s adaptation reminds us how many incidents in that cartoon were drawn from the book. Roberto Benigni – who starred in his own disastrous 2002 adaptation – appears as Geppetto, a lonely carpenter who carves a living puppet from a log of possessed wood. The wooden boy (Federico Ielapi) goes on a lengthy journey that leads him to a crafty fox and a craftier cat, an encounter with a blue fairy and adventures in the deceptively idyllic Toyland. He is transformed into a donkey. He is cast into the sea and nearly drowns. In the most Lynchian moment – Inland Empire springs to mind – rabbit pall-bearers threaten to carry his coffin towards a final resting place.

The tone could hardly be more different from the Disney project. Dressed in elegant autumnal shades, scored to tinkling chords by Dario Marianelli, the picture comes across as moral instruction through the medium of magic realism. No children’s writer would dare threaten their readers in this fashion any more: be a good person or be nothing.

Even for an adult the effect is constantly unsettling – everything in the world is way off-centre. But it’s an endlessly gorgeous, meticulously realised film that sets down a challenge to Guillermo del Toro as he continues with his “darker” stop-motion take on Collodi’s tale. This is, to paraphrase Nigel Tufnel, already none more dark.

On limited release from August 14th