Black Water: Abyss – The first cinema release in months. It must be a great movie, right? 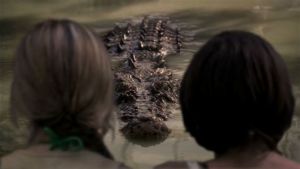 The film is the second killer Crocodilia picture we’ve experienced in the last 12 months.

More than a few undistinguished films have (for trivia buffs, anyway) gained a smidgeon of unexpected significance during the Covid era. Two horror flicks, The Wretched and Unsubscribe, broke different box-office records on the compromised US theatrical market. Now another rough blood-spiller becomes the first new release to open in cinemas for over three months. That asterisked footnote will, alas, be the only thing setting Black Water: Abyss from the following pack.

A follow-up to the same director’s Black Water from 2007, the picture is the second killer Crocodilia picture we’ve experienced in the last 12 months. It would be unfair to suggest that it is to the fine Crawl as all those bargain-basement man-eating barracuda rip-offs were to Jaws, but we can safely confirm that it thrashes in a lower division.

The model is as much Neil Marshall’s The Descent as any of those carnivorous beastie flicks. After a prologue involving the consumption of two irresponsible tourists, we move onto a group of young people embarking on a caving adventure.

Let us not dismiss any of the actors; Australians, after starting humbly in domestic productions, often blossom into Oscar-winning superstars. Suffice to say, whereas the men come across as trainee Hemsworths, the women get more opportunities to stretch out in the gloom.

Before descending, the team note that a weather system is moving in another direction and that it will thus cause them no difficulties. Are you guessing the cyclone is going nowhere and will cause them a great many difficulties? No spoilers.

The real threat is, of course, a shadowy shape, some frantic cutting and more splashing than you expect from a party of seven-year-olds in the shallow end. We all know the virtues of holding back glimpses of your monster. To make that work, however, the filmmakers needs a firm command of the effects that hint obliquely at menace. There’s little of that here.

Black Water Abyss is mostly composed of actors breathing heavily in studio tanks while torches bounce off dampened sets. The characters are dull, the tension poorly maintained and the outbreaks of violence deeply confusing.

Bonus points are awarded, however, for an aboveground epilogue that really does bring us back to the pulpy contrivance of a Roger Corman shocker. More of that please. Less of the under-illuminated wading.

On limited release from July 10th

TV Guide: 30 of the best shows to watch this week
6

John Hume: The US connection and the making of a documentary
10