Liam Neeson is not a ‘bigot’, says Whoopi Goldberg 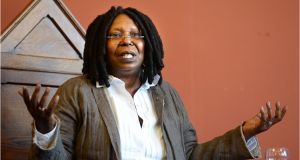 Whoopi Goldberg has defended Liam Neeson in the wake of a controversy over racially charged comments made by the Irish actor.

The star of Sister Act insisted Neeson was not a racist, saying she had known Neeson for a very long time and he was not a “bigot”.

Earlier this week, Neeson has told a journalist that, following the rape of a friend, he went out with a cosh with a mind to kill, in his words, a “black b*st*rd”.

The actor, who was promoting his upcoming revenge thriller Cold Pursuit, went on to explain that, as days passed and he calmed down, he realised the wrongness of his actions.

“It was horrible, horrible, when I think back, that I did that,” he said. “And I’ve never admitted that, and I’m saying it to a journalist. God forbid.”

“It’s awful. But I did learn a lesson from it, when I eventually thought, ‘What the f*** are you doing,‘ you know?”

The comments have generated much criticism and front-page news stories throughout the world.

“People walk around sometimes with rage. That’s what happens. Is he a bigot? No,” Goldberg (66), said on her US talk show The View.

“I’ve known him a pretty long time, I think I would have recognised. I’ve been around a lot of real bigots. You can’t be surprised that somebody whose loved one is attacked is angry and wants to go out and attack,” she said. “So I can say this man is not one.”

Michelle Rodriguez, who co-starred with Neeson in Widows last year, has also defended Neeson. “I don’t care how good of an actor you are. It’s all bullshit. Ignore it. He’s not a racist. He’s a loving man. It’s all lies,” she told Vanity Fair.

“I can’t see what the fuss is about frankly,” the Man Booker-winning author told The Irish Times.

“It seems to me people are not reading what the man said: ‘I had this urge. I shouldn’t have done it. I am ashamed of it. I shouldn’t even be saying this to a journalist.’ He was indiscreet to say the least.”

Neeson expressed regret in the original interview and reiterated his shame during a subsequent appearance on ABC’s Good Morning America. “I’m not a racist,” he told host Robin Roberts.