Condemned to Remember: The startling humanity of a Holocaust survivor 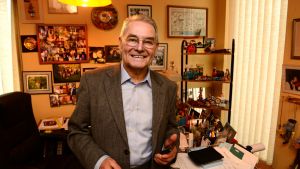 We sometimes throw the word “inspirational” around a little too glibly. But there are few more inspirational people in Ireland than the indomitable Holocaust survivor Tomi Reichental. Gerry Gregg, who directed Reichental in a fine documentary, Close to Evil, returns with an even better, wider-ranging work. There are few frills to Gregg’s approach. No voiceover. No animation. No surging chords. It will work perfectly well on television. But this remains among the most moving films we will see this year. All involved should be proud.

We begin with Reichental greeting his 80th birthday. He is quietly dedicated to tolerance and notes that he is surely among the few Holocaust survivors enjoying such an anniversary in a mosque. He addresses the faithful. They return his friendship. The event inspires him to embark on a journey across Europe to remember the past and worry about new, uncertain futures. He returns to Slovakia, where most of his family were murdered by the Nazis, and marvels aghast at the rise of fascists. “This is where I grew up and where I should have ended my days,” he says as he approaches his hometown.

In Germany he revisits the case of Hilde Michnia, an official at Bergen-Belsen who has evaded conviction, and ponders how that country processed its past. Back in Ireland he befriends a Syrian refugee and sighs as, when taking part in a radio show, callers angrily reject the idea of taking in a mere 10,000 more.

The stories knit together to form a tragic pattern within which can be read warnings for the future. Reichental’s calm humanity is startling. He weeps more than once. He expresses disappointment. But he never seems to lose hope. The lesson is, perhaps, summed up in a (possibly apocryphal) quote attributed to General Eisenhower. “Get it all on record now,” he is alleged to have said. “Get the films because somewhere down the track of history some bastard will get up and say that this never happened.”

Catherine Keener: ‘I did not know about Harvey Weinstein at all’
9