Carl Reiner, master of comedy, has died at 98

Reiner was a gifted comic actor but mainly wrote, directed and let others get the laughs 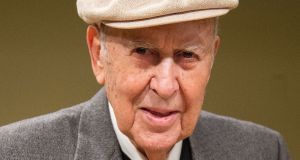 Carl Reiner, who as performer, writer and director earned a place in comedy history several times over, died on Monday night at his home in Beverly Hills, in California. He was 98. His death was confirmed by his daughter, Annie Reiner.

Carl Reiner first attracted national attention in 1950 as Sid Caesar’s multitalented second banana on the television variety show Your Show of Shows, for which he was also a writer. A decade later he created The Dick Van Dyke Show, one of the most celebrated situation comedies in US television history, and teamed with Mel Brooks on the hugely successful 2000 Year Old Man records. His novel Enter Laughing became both a hit Broadway play and the first of many movies he would direct; among the others were four of Steve Martin’s early starring vehicles.

He won praise as an actor as well, with memorable roles in films like The Russians Are Coming, the Russians Are Coming and, more recently, Ocean’s Eleven and its sequels. But he spent most of his career just slightly out of the spotlight, letting others get the laughs.

His contributions were recognised by his peers, by comedy aficionados and, in 2000, by the Kennedy Center, in New York, which awarded him the Mark Twain Prize for American Humor. He was the third recipient, after Richard Pryor and Jonathan Winters.

Reiner’s association with Caesar encompassed three different series: After Your Show of Shows the two worked together on Caesar’s Hour, which had a three-year run on NBC, and Sid Caesar Invites You, a failed attempt to recapture the Show of Shows spirit that lasted less than one season on ABC in 1958.

Seen on CBS from 1961 to 1966, The Dick Van Dyke Show won 15 Primetime Emmy Awards for its cast and crew, five of them for Reiner as writer and producer. (He won nine Emmys overall.) It is widely regarded as one of the greatest sitcoms of all time.

When Enter Laughing was sold to Hollywood, Reiner shared screenwriting credit with Joseph Stein for the 1967 film adaptation, starring Reni Santoni. It was Reiner’s third produced screenplay, after The Thrill of It All (1963) and The Art of Love (1965). More important, it was the first film he directed.

That year he made his Broadway debut as a writer and director with Something Different, the story of a playwright suffering from writer’s block. It received generally good reviews and had a respectable three-month run. By that time, however, Reiner’s focus had shifted westward.

He had already appeared in a number of Hollywood movies by the time he and his family moved to Beverly Hills, in the late 1960s, and he would continue to show up on screen occasionally. But for the next three decades he did most of his work in Hollywood behind the scenes.

Carl Reiner was born in the Bronx, New York, on March 20th, 1922, to Irving Reiner, a watchmaker, and Bessie (Mathias) Reiner. Reiner married Estelle Lebost in 1943. She died in 2008. In addition to his daughter, an author and psychoanalyst, he is survived by his sons, Rob, known for directing When Harry Met Sally, A Few Good Men, This Is Spinal Tap and numerous other films and for his role as Archie Bunker’s son-in-law on the groundbreaking sitcom All in the Family, and Lucas, a painter and film-maker; and five grandchildren. – New York Times