Anthony Ramos: From the hood to Hollywood

With starring roles in Hamilton and his new film Monsters and Men via A Star is Born, the actor is on the rise 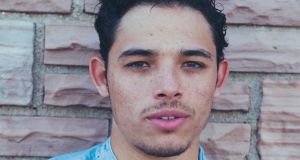 Anthony Ramos on Monsters and Men: “It was the one script I read that year that made me think I have to go above and beyond and do everything I can to be in this movie.” Photograph: Lauren Desberg

In the three years since he originated the dual roles of John Laurens and Philip Hamilton in the Broadway musical Hamilton, Anthony Ramos has been ridiculously busy.

In 2016, Hamilton superfan Spike Lee cast the young Brooklynite as Mars Blackmon – a role originally occupied by Lee himself – in the Netflix series She’s Gotta Have It, a reboot of the 1986 film of the same name. Expect to see Ramos knocking around this awards season on the back of his role as Lady Gaga’s best friend Ramon in A Star is Born.

Later this year, he’ll feature in the CBS sitcom Krishna and appear alongside Millie Bobby Brown and O’Shea Jackson Jr in Godzilla: King of the Monsters. He has already recorded vocals for next year’s Trolls World Tour and is currently shooting Honest Thief with Liam Neeson (“He is the man, though!” says Ramos of his Irish co-star).

“It’s wild for sure,” says the 27-year-old. “I didn’t see any of it coming. But I’m definitely not complaining.”

Ramos is one of three protagonists in Reinaldo Marcus Green’s compelling debut feature, Monsters and Men. A triptych linked by the death of local Bedford-Stuyvesant character Big D (Samel Edwards) who is killed during an encounter with the police, the film unfolds from three perspectives: a compromised African-American officer (BlacKKKlansman’s John David Washington), a disillusioned high school sports star (Kelvin Harrison Jr), and Manny (Ramos), a friend of the deceased who films the incident on his smartphone.

He’s warned by the cops that sharing the video would be “a disservice to everyone”, but stories that the victim “went” for a policeman’s gun make it increasingly tempting to upload the footage.

“I was shooting Monsters and Men and Godzilla at the same time so I was going back and forth to Atlanta and shooting this behemoth of a film and then coming back to New York and shooting the small film where everyone is involved in the creative process and you have conversations with the director and the DP Patrick Scola. We shut up one neighbourhood over from where I grew up, I grew up in the projects in Bushwick. It was awesome just getting to be home and shooting something at home and a story that is familiar to me.”

He pauses: “It’s unfortunately familiar to me.”

There are countless real world incidents that might have inspired Monsters and Men, but there are unmistakable parallels with the the death of Eric Garner in 2014, an incident which was also filmed by the victim’s friend.

“They really did that guy dirty,” says Ramos. “It’s unfortunate that the story is based on true events and that relationship with reality made it mentally exhausting. But it has an important message. I have cops in my family. I was talking to one of my cousins about it. He’s a detective and we were talking about the situation depicted in the movie. We agreed on some things and we disagreed on others; definitely disagreed. But it was encouraging to know that I could have that conversation with a cop, and it didn’t get out of hand and we didn’t get angry. We were able to understand each other. I just hope that the movie helps other folks to do that.”

Anthony Ramos Martinez, the middle of three siblings of Puerto Rican descent, grew up with his mother, sister, and brother, in Bushwick, Brooklyn. At high school, he auditioned for what he thought was a talent show, bringing him to the attention of the school’s musical director, Sara Steinweiss.

“I sing my song and she’s like: can you read these lines,” he laughs. “And I said: I don’t do that. And she said: well you have to do that; it’s a musical. Then next day I find out I’ve got the part but it took two weeks of deliberation between myself and myself before I decided I’ll do it.”

Ramos had hoped for a career in baseball but things didn’t quite go according to plan: “I wasn’t good enough to be in the Major League,” he says. “But I was good enough to play college baseball and get into coaching. For me it was the best way for me to get money to go to school and to continue to play the sport that I love. But I was in senior year at high school and I’ve been turned down from every school I applied to. So I’ve no school to go to and I was going through some family trouble at the time. I was pretty frustrated. I thought about going to the navy or community college.”

His teacher, Sara Steinweiss, came to the rescue paying the required $10 fee required and assisting him with admissions essays for the American Musical and Dramatic Academy. She also gave his name to the Jerry Seinfeld Scholarship Fund.

“The school called and told me I was in and I had to give them a deposit,” recalls Ramos. “I asked them for one more day please and two hours later the scholarship fund called to tell me they were going to pay for school for me for four years.”

“I knew he was the star from the minute I saw him, from the minute he walked into the audition room, and to watch his career grow has been one of the great joys of my life"

Post-graduation was a bit of a struggle. His first agent dropped him but he kept auditioning for anything he could. He performed on a cruise ship, took a role in a touring production of Damn Yankees, and starred in a regional production of Lin-Manuel Miranda’s In the Heights.

Ramos would finally meet Miranda in 2014 at a call for Hamilton.

“I knew he was the star from the minute I saw him, from the minute he walked into the audition room, and to watch his career grow has been one of the great joys of my life,” Lin-Manuel Miranda tells me just ahead of the London premiere of Mary Poppins Returns.

“I saw Anthony play Usnavi in In the Heights at the Kennedy Centre. I wrote a whole thread about it on Twitter and I probably can’t top what I said there. But watching him play that role was like I owned tap shoes as a child and I put them away in the attic and I forgot about them . And then one day, I found them and I get to see my child in the tap shoes. And they fit him better than they ever fit me. And I think to myself: that’s why I saved them. That’s how I feel watching him. He’s someone who means so much to me and he was a huge part of the development of Hamilton.”

When did Ramos realise that Hamilton was a cultural phenomenon?

“I realised it when the president was coming,” he laughs. “I mean, it couldn’t be any clearer than that! But I knew it was special from the moment I set foot in the room on the first day of rehearsals. We had a four-week lab in 2014 and I sat there. Looking around, I couldn’t believe I was in that room. And then the music started to play. I’ve never forgotten the moment I heard: ‘How does a bastard, orphan, son of a whore and a Scotsman . . .’

“For someone who grew up listening to hip hop and for someone who also has studied musical theatre and to hear those worlds collide so beautifully, I felt like my mind was about to explode. I tried to explain to people before the show came out what it was about and they were looking at me like I had two heads. And then it became what it is.

“You get people like Stephen Sondheim praising the show and somebody like Busta Rhymes giving a 30-minute speech talking about how inspired he was by the show. It’s special to be part of something like that.”

Ramos and Miranda have a solid track record together. Before Hamilton’s off-Broadway premiere, Ramos played Justin Laboy in Miranda’s 15-minute musical 21 Chump Street, for a one-time performance that was recorded for NPR’s This American Life. They reteamed in October 2017 with Ramos providing some of the vocals for Miranda’s song Almost Like Praying, a release to benefit Hurricane Maria victims. In the coming months, Ramos goes into pre-production on the eagerly anticipated film version of In the Heights. Miranda is on board as a producer and Jon M Chu (Crazy Rich Asians) will direct a film that was subject to a $50 million multi-studio bidding war.

“We start shooting in April, we’re doing a bunch of pre-production stuff before that,” says Ramos. “I’m just hoping I remember all the songs”.