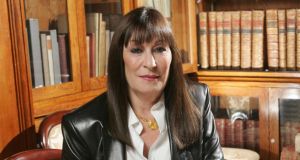 Anjelica Huston: “I think there’s a whole element of guys who will get up to what they want to get up to.”Photograph : Matt Kavanagh

Actor Anjelica Huston has come out in defence of under-fire film-maker Woody Allen, and expressed sympathy for other controversial entertainment industry figures including Roman Polanski and Jeffrey Tambor. In an outspoken and wide-ranging interview published in New York magazine, Huston was asked for her thoughts on Allen, with whom she worked on his acclaimed 1989 film Crimes and Misdemeanors.

Huston said she would work with him in again “in a second”, noting that “two states investigated him, and neither of them prosecuted him”. Allen is currently in a legal dispute with Amazon, which cancelled its four-film agreement with him in the wake of his daughter Dylan’s allegations of sexual abuse and his response to the #MeToo campaign.

Huston joins another Allen collaborator, Javier Bardem, in publicly refusing to boycott the director, following of a string of actors – including Greta Gerwig, Timothée Chalamet, Colin Firth and Rebecca Hall – expressing their regret at working with him.

Huston was also asked about Polanski’s 1977 sex abuse case, in which she was a key figure having been present in her then boyfriend Jack Nicholson’s house where the abuse occurred. (Huston was arrested the following day for cocaine possession.)

Huston said Polanski’s behaviour was part of “a whole playboy movement” at the time, and that approaching underage girls was “de rigueur for most of those guys like Roman who had grown up with the European sensibility”, citing her own experiences as a teenager when “the older guys would all hit on you”. She also added that Polanski had “paid his price”.

Polanski left the US in 1978 after accepting a plea bargain, which reduced the charges from rape to unlawful sex with a minor, but before sentencing.

Huston was also asked about working on the TV series Transparent with Tambor, who was fired in 2018 after sex harassment allegations by other cast members. Suggesting Tambor’s actions may have been “misinterpreted”, Huston said: “Insofar as I was concerned, nobody did or said anything inappropriate … [Actors] have to feel as though we can say and do things that are not necessarily judged, particularly by the other people in the cast or crew.”

Huston, 67, talked about her own “#MeToo experiences” of harassment in the film industry, saying they had happened “on a daily basis, practically”. She added: “That’s how often it happens, that you’re objectified, or misread, or put down. I think men do it a lot, and I don’t really think half the time they know what they’re doing. That’s how inured they are.”

Huston elaborated on her difficult relationship with her father, film director John Huston, as well as her long time partner Nicholson (whose cocaine use she described as “smart”). – Guardian