What are the best novels in Irish? Here’s a liosta 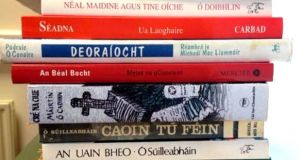 Some of the books included in Úrscéalta na Gaeilge. Photograph: courtesy of loveleabhargaeilge.com

We all make lists: the day-to-day things end up on a yellow sticky note; the groceries on a page of some sort or other, scribbled out in pencil or biro. The arts are no different – longlists are compiled for competitions, followed by the shortlist. Every award presented has a list of the nominees read out in senatorial tones, though only one person is actually lucky enough to win. Then there are the top 10 lists – top 10 best dramas; top 10 best paintings; top 10 best books.

The book Úrscéalta na Gaeilge, edited by Ronan Doherty, Brian Ó Conchubhair and Philip O’Leary, has its roots in the best-novels-in-Irish-liosta. There are 16 essays on 16 different novels. That is not to say, however, that there are 16 different authors discussed. Some writers – Máirtín Ó Cadhain, Diarmuid Ó Súilleabháin and Irish Times columnist, Alan Titley – have two books apiece in the mix.

This particular list began its life as a two-day conference in Dublin in 2015. The aim was to discuss the development of the novel in Irish since the beginning of the 20th century and to distil the best works out of that discourse. And, yes, cynical reader, there have been quite of few of them. Indeed, Úrscéalta na Gaeilge contains an index of Irish-language novels published between 1901 and 2015. This reviewer lost count of the exact number after 210.

It was a genre dominated by men during the greater part of this period. The reason as to why this was the case was debated by a special panel of female academics and writers during the actual conference.

One of book’s editors, Brian Ó Conchubhair, rightly mentions in his introduction the “bláthú suaithinseach”/”remarkable blossoming” that has seen more women write novels in recent times. Undoubtedly, the list will have to be updated at some point.

There are certainly works of substance in the hundred year index and some that are so slight that you feel sorry for the poor tree that was felled so that the novel in Irish might be printed. In that, of course, Irish is no different to any other language when it comes to creative endeavour. Sometimes the author succeeds and sometimes not. Not every book in English, French, German is a bestseller.

Still, there is something genuinely moving to see just how many people undertook the challenge to try to write a novel in Irish over the decades. Novels are hard work and novels in languages that are not widely spoken, with few readers, are even more difficult literary challenges.

How do creative writers sustain their vision when they know the audience will amount to a handful of readers? Many did simply out of language loyalty, simply because they felt they could do no other, while others – those lucky few–- wrote first-class fiction that did find an audience.

Then again, perhaps the victory for the creative writer in Irish, lies not in instant gratification but rather in the sure knowledge that, over time, if the novel is taken to heart, that it will be continued to be read decades after the author’s death.

The first novel discussed in Úrscéalta na Gaeilge is instructive in this regard. Peadar Ó Laoghaire’s Séadna (1901) marks the beginning of the novel in Irish and is still being read. Sooner or later, every Irish-speaker with an interest in Irish, reads Séadna. This is 2018. That is a lot of readers, accumulatively speaking. Novelist and Irish Times contributor Alan Titley writes that Séadna was the first book to “scare the shit” of him when he read it aged seven at school. It is the story of An Fear Dubh – the devil – and of souls being sold and bartered.

Titley notes that not every everyone was interested in it; Ulster folk held it in no great regard and the writer, Máirtín Ó Cadhain, was indifferent to it. Why then, asks Titley, has it continued to enjoy so much success and, indeed, controversy? He makes the case for the book, candidly, carefully and with conviction. That approach is mirrored in other essays. These are not essays by propagandists but rather by well-informed critics who know the literature about which they write, its achievements and failings.

Certainly, this is one of the greatest strengths of Úrscéalta na Gaeilge; it gives writers with a passion for literature an opportunity to indulge that love. In the interests of full disclosure, it should be noted that this journalist has an essay in the book. Indeed, that essay is on one of the two novels that Titley has on the victorious list of 16. Yes, the Gaeltacht is a small and incestuous place but, in my defence, I reviewed An Fear Dána when it was first published in 1993, not knowing Titley at the time.

This journalist’s effort aside, it was a joy to read so many essays by so many fine writers and to be reminded of how many accomplished novels there are by the likes of Pádraic Ó Conaire, Máirtín Ó Direáin and Myles na gCopaleen, to name but three.

Máirín Nic Eoin’s essay on Dé Luain (1966), a novel by Eoghan Ó Tuairisc, is as good a piece of literary writing as you will find. Nic Eoin, Professor Emerita of Irish at Dublin City University, gives the background to the novel - it deals with the Easter Rising – places it in its political, historical and cultural context and, most intimately of all, mentions the difficulties that Ó Tuairisc had in completing the work in time for the 50th anniversary of the Rising. His wife, Úna Watters, an accomplished artist, died unexpectedly as he wrote the book. Not surprisingly, this loss had an effect on Ó Tuairisc, the man and writer.

Similarly, Pádraig Ó Siadhail’s writings on the novel Cuaifeach mo Londubh Buí (1983), by Séamas Mac Annaidh, is another excellent essay which is both intimate and illuminating. Ó Siadhail, a Derry-born academic now working in Canada, remembers the novel as it happened, as an event in itself. Novelist and critic are of a similar age. Fermanagh-born Mac Annaidh’s first novel appeared out of nowhere and had everyone talking about it – and reading it! – in a very short time. Indeed, the folklore surrounding the novel is as much part of the novel’s tale as the actual words in print.

How and why it happened no one really knows. It was the 1980s, there was no internet, no Irish-language television station and Old Irish ruled the academic roost in Gaeldom. Violence in the North was brutal and if someone from Fermanagh were to write something in Irish, it would be about the Troubles, right? Wrong! Mac Annaidh gave his readers something unique, anarchic, a work that is still being mulled over for its meaning. Ó Siadhail gives an insight into Mac Annaidh the phenomenon and the writer. His essay is a case study in how to write something that appeals to both heart and head.

It is not all good news, though. There are, understandably, disagreements. Writer and publisher Darach Ó Scolaí notes in a review at the end of the book that he feels that the final selection of novels is biased towards “the needs of the university”. The two books by Diarmuid Ó Súilleabháin, Caoin Tú Féin (1967) and An Uain Bheo (1968)–- ably argued for by critics Éamon Ó Cíosáin and Antain Mag Shamhráin – give some credence to that. It is this reviewer’s memory of reading Ó Súilleabháin as an undergrad and finding him very hard going. One book? Sure. Two? Hmmm.

Other choices may cause some bemusement. Liam Ó Docharthaigh, an academic of long-standing, writes a wonderfully evocative essay on Seosamh Mac Grianna’s book, Mo Bhealach Féin (1940), its effect on newly-minted university students and its literary merits. Yet few, notwithstanding Ó Dochartaigh’s advocacy, would accept that it is, in fact, a novel. Mo Bhealach Féin is widely regarded as an autobiography, of sorts, a literary memoir, a manifesto even, but not a novel. Indeed, just as bemusing, Mac Grianna’s best-known novel, An Druma Mór, does not make the completed list.

That said, that is another gift that Úrscéalta na Gaeilge gives – to make one think again. The humble reader will find much to ponder and who knows what sort of list they might be putting together a 100 years from now?