Vox by Christina Dalcher: A dystopia where women are gagged

In a post-Me Too America, women have been reduced to speaking 100 words a day 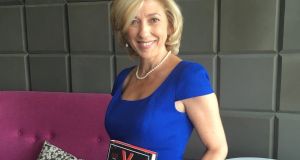 Christina Dalcher is especially effective on how language contorts and confuses

Late in Vox, Christina Dalcher’s debut novel, the narrator reflects: “I don’t know how many times I’ve said ‘I could kill him’ in my 40-odd years. Maybe a few thousand.” She concludes that the words are “semantically vacuous”, meaningless, throwaway. In Vox, however, words matter and none can be wasted. Set in a present just like our own, with a president who enjoys being on television, women have been reduced to speaking just 100 words a day. They are kept in check by bracelets that deliver electric shocks if they step out of line, a nightmare dystopia for any woman who’s ever been told to not get lippy by a man.

In response to the steady rise of women’s voices, and particularly the honesty and force of these voices throughout the #MeToo movement, Dalcher is asking: what if we were silenced? And how long would it necessarily take to be starved of language?

When we first meet Jean, she’s the mother of four children in the suburbs – three boys and a progressively quiet girl – still demonstrating her own domestic resistance. Dalcher is especially effective on how language contorts and confuses, and how certain words and ideas delivered by an adult to a young person can leave a lasting and immovable impression. Steven, Jean’s eldest son, decries the loss of morality and home values in the US, as he leans towards some fictional faction of the far-right. The scenes between Jean and her son, as he belittles her and drifts further away into some murky unknown with its own distinct set of rules, are tense and engrossing, and Dalcher understands how ideologies can cause irreparable familial rifts.

Certainly, the early chapters, where Jean tries to educate and communicate with her family using the limited means available to her, are taut and engaging. They also allow Dalcher to develop the world she has created; the television set booms news from a Pure World where LGBT communities suffer in internment camps, infidelity is outlawed and public shaming is ritual and nightly. How could this happen? Well, the question is answered in microcosm as Jean’s husband, Patrick, stands on and does nothing as his son becomes increasingly volatile, hateful and hostile towards women.

In this pure and sterile world, women’s reproductive rights are the first to go. Jean is reminded of her own complacency whenever her old roommate, Jackie, a righteous and active feminist – or, as Steven calls her, a screaming hysterical lady – appears on her television screen. Jackie’s sincere face prompts some self-reckoning from Jean – the marches she didn’t attend, the flyers she didn’t hand out, the petitions she didn’t sign, all for her own selfish desire to stay comfortable. We’re reminded of recent grass-roots movements, including the Women’s March.

In Reverend Carl, we find another version of Alex Jones, a hate-monger preaching fear and terror in unstable times. The president’s wife is a former fashion model. One repeated slogan is Make America Moral Again! Vox can be slightly heavy-handed with its contemporary references when some subtlety is required. As Jean moves from the home to the laboratory, where she is restored to her rightful position as Dr McClellan for a secret government mission, Vox becomes less of a thoughtful meditation on the power of language, and the danger of silence, and more of a race against time. Still, it’s nicely paced and Dalcher keeps up the suspense across 80 fast-moving chapters.

It must be said that, for a dystopia, Vox is remarkably conformist in its outlook. Jean openly admires her lover Lorenzo’s aggression and dislikes her husband’s more mild-mannered demeanour. At one point she celebrates the idea that “Lorenzo would beat the living shit out of someone” who attacked her. Surely these are the very patriarchal values a novel decrying the patriarchy should eschew? Women can’t speak but, even on this imaginative flight of fancy, men are still required to speak with their fists. It’s a striking reminder of the limiting roles we’re all required to play. To me, the most honest section of the novel, disregarding gender lines, comes as Jean watches out her car window as the landscape moves: “As we drive, the landscape changes from rural to suburban. All these houses, I think, are little prisons, and inside there are cells in the shapes of kitchens and laundry closets and bedrooms.”