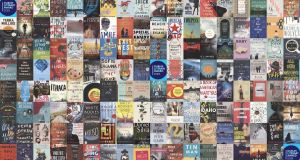 A collage of the 141 longlisted titles

Midwinter Break by Bernard MacLaverty and The Heart’s Invisible Furies by John Boyne are the two Irish titles to have received the most nominations (six) from libraries worldwide for the €100,000 International Dublin Literary Award, the world’s most valuable annual literary prize for a single work of fiction published in English. Last year’s winner was Mike McCormack for Solar Bones.

Exit West by Pakistani author Mohsin Hamid, his second novel to be shortlisted for the Man Booker Prize after The Reluctant Fundamentalist, received the most nominations overall (11). It was followed by two Man Booker Prize-winning authors, The Ministry of Utmost Happiness by India’s Arundhati Roy and Lincoln in the Bardo by US writer George Saunders (both nine); Go, Went, Gone by Germany’s Jenny Erpenbeck, translated by Susan Bernofsky, and US National Book Award winner Sing Unburied Sing by US writer Jesmyn Ward (both eight); and Reservoir 13 by Costa Novel Award winner English author Jon McGregor (six), a previous winner of the Dublin award in 2012 for Even the Dogs.

Erpenbeck was shortlisted in 2016 for the International Dublin Literary Award for The End of Days, which also won the Independent Foreign Fiction Prize.

Organised by Dublin City Council, the 2019 award was launched today by its patron, Lord Mayor Nial Ring, who commended it for its promotion of excellence in world literature as well as for the opportunity to promote Irish writing internationally. “Dublin is a Unesco City of Literature, and cultural tourism is a vital part of the city’s economy,” he said. “This prestigious award enhances the city’s worldwide reputation as a literary destination.”

Nominations include 39 novels in translation with works by authors from 41 countries in Africa, Europe, Asia, the US, Canada, South America, Australia and New Zealand.

There are eight other Irish novels among the (very) long list of 141 titles: Conversations With Friends by Sally Rooney; Mrs Osmond by John Banville; A Line Made by Walking by Sara Baume; Smile by Roddy Doyle; The Blood Miracles by Lisa McInerney; The Dead House by Billy O’Callaghan; Ithaca by Alan McMonagle; and Acts of Allegiance by Peter Cunningham

Mike McCormack said on winning the 2018 prize: “It speaks something generous, eloquent and enquiring that Dublin City Council for so many years have put their resources, their weight, all their expertise behind this prize. It has huge international standing, it has a unique reach and a unique generosity and long may it live, it’s one of the shining jewels in this country’s crown.”

Brendan Teeling, acting Dublin City Librarian, revealed that the 141 books eligible for the 2019 award were nominated by libraries in 115 cities and 41 countries worldwide; noting that 39 are titles in translation, spanning 16 languages and 48 are first novels.

All of the novels nominated for the award are available for readers to borrow from Dublin’s public libraries. The shortlist will be revealed on April 4th, 2019 and the winner will be announced on June 12th.