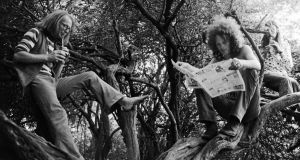 A history of the British countryside as seen through the connections between landscape and music might not seem like the most exhilarating of topics, but The Lark Ascending by Richard King (Faber & Faber, £14.99), outplays expectations with a mixture of rigorous research, common sense, and what you would have to describe as an enthusiastic overview. “The depth of feeling we have for nature,” writes King, “transcends the rule of law and the ownership of property or acreage.” With the book’s title taken from British composer Ralph Vaughan Williams’s short musical reverie (“an experience as intimate, if not spiritual, as music can create”), King balances the account by personalising it. Walks through the countryside – the author lives in hill-farming Radnorshire, Wales – are accompanied solely by instrumental, meditative, minimalistic music that makes him experience “regular moments of complete immersion”.

As well as the emphatically personal, King recounts the recent historical associations between the land and contemporary music, using as his loose starting point the pensive score by composer/arranger John Cameron for Ken Loach’s 1969 movie, Kes. “When it is heard,” King explains, “the score alleviates the earthbound reality of waterlogged football pitches, shifts at the pithead and the austere social conditions.”

Further, valid connections are made with musicians such as Donovan (with whom Cameron worked on Loach’s 1967 directorial debut, Poor Cow), Vashti Bunyan, Traffic, Fairport Convention, and Paul McCartney, all of whose music around this time was informed, in part, by their respective return to the countryside. Kate Bush, too, receives due praise for her 1985 Hounds of Love album – “Middle England took this music to its heart”. Something of an understatement, maybe, but King, much like the exceptional book he has written, gets to the nub of the matter.

Unsophisticated, messy, noisy, distorted – the garage rock genre has little time for civilities. With its origins in 1950s America, notably California and the Pacific Northwest, the three-chord template for the music was set to rock and to roll. In popular music, the genre is essentially niche, yet the ripples it has produced from the late 1950s onwards continue to be heard in contemporary groups such as White Stripes, Black Keys, Royal Blood, The Hives, and more. Five Years Ahead of My Time: Garage Rock from the 1950s to the Present by Seth Bovey (Reaktion Books, £9.95), is the first comprehensive overview of a genre that has survived more on passion than commercial reach. Bovey, a professor of English at Louisiana State University of Alexandria, and a former member of garage rock bands in the 1970s, thankfully shoves fan excitement aside in favour of informed research.

From Link Ray’s influential 1958 track Rumble (the only instrumental single banned from US radio – it was too gritty, too shrill) to surf rock and the cultural shift in America following the arrival of The Beatles, as well as more recent developments in the genre across Eastern Europe, Bovey commendably covers a lot of ground previously left untouched.

Adrian Whitaker, the author of Dr Strangely Strange: Fitting Pieces To The Jigsaw (Ozymandias Books, £14.99), achieves something similar with the unveiling of Irish psych-folk group Dr Strangely Strange (core members Tim Booth, Tim Goulding, and Ivan Pawle, who continue to make occasional music) and their place in the burgeoning music scene of Dublin in the 1960s. Via reminiscences of socialising in Toners pub (“a pleasant watering hole with an indifferent pint” that hosted “the cream of Dublin’s avant-garde, writers, artists, musicians, poets, all still friends – or at least talking to each other”), gigs enhanced by light shows created by one Ashtar from Mars (who “grew some pot plants in one of the borders in St Stephen’s Green”), and their 1969 debut album, Kip of the Serenes (“an acquired taste”, Disc & Music Echo), the book is a cornucopia of evocative detail from that time.

Festooned with images, lyrics, memorabilia, and reinforced with first-hand interviews from the main protagonists, this is a deep dive into a generally misunderstood Irish group that, notes BP Fallon, if they “weren’t entirely in tune or in time, were entirely in tune with the times”.

More than 20 years ago, UK-based music writer Amy Raphael wrote Never Mind the Bollocks, which featured a dozen female musicians (including Courtney Love, Bjork, Kim Gordon, Liz Phair) discussing what author Suzanne Moore described as “a culture adjusting itself to female power”. Raphael returns with A Seat at the Table (Virago, £14.99), a perceptive and candid collection of new interviews with 18 women that discuss everything from #MeToo and queer politics to the impact of social media on their lives and the subtleties of routine misogyny.

In her lengthy and insightful introduction, Raphael recalls what Sonic Youth’s Kim Gordon said to her more than two decades ago: “the mainstream doesn’t consider you if you’re a woman making what they see as annoying music”. It is from this that A Seat at the Table (at once referencing the title of Solange Knowles’s 2016 album, and the broader sense of being an integral part of a conversation) reaches out further via interviews with Kate Tempest, Alison Moyet (“Doors were always closed to me… I’ve never seen a closed door as something to stop movement”), Maggie Rogers, Poppy Ajudha, Mitski and Tracey Thorn (“For as long as I can remember, I was aware of feminism without having a word for it – I intuitively knew boys shouldn’t be allowed to be in charge of the music scene”).

A coincidental but no less essential ancillary book to A Seat at the Table is Revenge of the She-Punks: a Feminist Music History from Poly Styrene to Pussy Riot, by Vivien Goldman (University of Texas Press, $17.99). An adjunct professor teaching Punk, Afrobeat and Reggae at New York University, and a former UK-based music writer for defunct music weeklies Sounds, NME, and Melody Maker, Goldman has been writing for almost 50 years about women (“sheroes”) and their place in rock music. Inspired by the X-Ray Spex song, Oh Bondage, Up Yours!, she “knew at once that with all its saucy frisson, the bondage [X-Ray Spex vocalist Poly Styrene] sang about was not S&M; rather it was the patriarchy…” With personal encounters running parallel with themes such as identity and protest, Goldman makes excellent points about punk’s “liberating aspect on the less-privileged sex”, framing it as the “primal yowl of a rebellious underclass [that] has always specially belonged to girls.”