‘Lights in the Distance’ review: How Europe treats ‘inconvenient people’

Daniel Trilling tells the stories of refugees from Africa and Asia 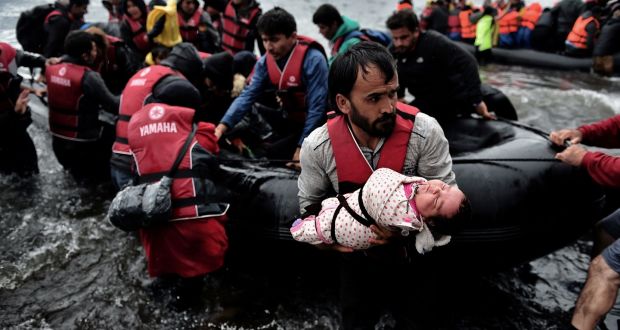 A migrant carrying his baby as they come ashore along with other refugees and migrants arriving on the Greek island of Lesbos after crossing the Aegean Sea from Turkey. Photograph: Aris Messinis/AFP/Getty Images

Book Title:
Lights in the Distance

Daniel Trilling has been covering what has typically been called Europe’s “refugee crisis” for several years now. His reporting, found in the London Review of Books, the New Statesman or the New Humanist, which he also co-edits, has been some of the most considered and insightful published anywhere during that time. Lights in the Distance, a collection of stories tracing the paths people take from Africa and Asia towards (and through) Europe, is the culmination of that work to date.

The book is written in the first person, and it captures Trilling as he visits and interviews people who have made the journey to Europe. These interviews take place at precariously rented apartments in the rundown suburbs of small-town Sicily. They take place in detention camps in Bulgaria, Greece, and Italy. They take place in remote German towns, and an unnamed city in northern Europe; marginal, transitory spaces. Jamal, the young Sudanese man we meet in that unnamed northern city, has travelled on flights with false documents, clinging to the bottom of lorries and locked away in the hold of a ship. He passes through Izmir, Patras, Venice and Calais. He witnesses violence, poverty, and solidarity. His story is the first in the book; it is long and unresolved. It is one of many.

As a single, able-bodied young man, Jamal is one of the luckier ones. Zainab, an Iraqi woman travelling alone with two children, spends all of her life savings on smugglers who repeatedly sell her short. Fatima, a remarkable Nigerian woman, counsels girls who are constantly trafficked through the same smugglers’ networks she used to reach Italy. Sex work, manual labour and intense deprivation haunt the book.

At the same time these people create networks of their own, where they turn for support and friendship. They play football, post memes, discuss politics. They show off new clothes on Facebook and talk to friends at home on WhatsApp. Trilling watches as young Syrian men in Germany blow kisses to a group of Ukrainian girls on a version of Chatroulette. Real life, recognisable life, goes on in the the strangest and most inhumane of places.

The testimonies of Trilling’s sources inevitably touch on points – a particular location, some legislation, social or political unrest – which resonate beyond the individual telling the story. Trilling uses these moments as opportunities to provide context and to explain, in straightforward prose, the significance of what his source is saying. It is a subtle but effective way of packing a lot of necessary information into sincerely emotional narratives. It looks simple on the surface, but this patterning takes a great deal of skill to sustain over a long period. The mountains of bureaucratic and legislative paperwork that Trilling has undoubtedly sifted through never weighs upon the stories of the people in the book. Over time, you begin to hear the echoes from story to story, the common ground that unites often wildly different experiences. You begin to see the same obstacles and traps peppering their varied journeys.

Trilling writes that “Border defence, not the protection of life, remains Europe’s priority,” but this is a book more interested in what happens to people after they have crossed those guarded borders. He talks to people who have taken incredibly risky and arduous journeys across thousands of miles – deserts, seas, mountains; planes, trucks, inflatable boats – and upon arrival found themselves trapped within a system that quite forcefully wishes they didn’t exist. Trilling wants to see how the story continues when that first part of the journey is complete; how does life go on in the aftermath?

This is what makes Lights in the Distance such a powerful book. In the midst of an escalating crisis, Trilling manages to keep his lens focused tightly on the people who are most intimately affected by the geopolitical catastrophe taking place around them. They tell their stories in retrospect, but never from a point of conclusion. Most often they continue to live in the limbo of the asylum system. As Trilling says, they are ordinary people; they lie, they bend rules, they withhold information when it suits them. They get depressed, they make mistakes. None of that makes them any more deserving of the systematic humiliation they face in trying to live in Europe. Their voices, so often unheard, so often wilfully silenced, tell this story better than anyone else can.

In the final pages, Trilling visits a border patrol centre in Ukraine, where he finds a holding cell just recently evacuated. “This was Europe’s border system working as intended,” he says. “Inconvenient people kept out of sight and out of mind, with their inconvenient stories unheard.” Lights in the Distance is a book full of these inconvenient stories, and there are many people who will not want to hear them.