Christy Brown archive to be auctioned in London

Bonhams sale to include letters, paintings and unpublished poems 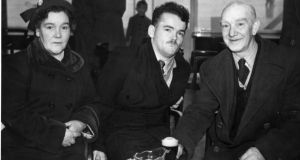 Christy Brown, author of My Left Foot, at Dublin Airport en route to London with his parents. 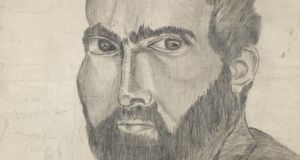 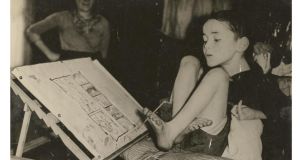 Portrait of the artist as a young artist 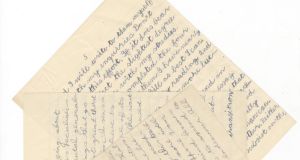 A sample of Christy Brown’s correspondence from 1952 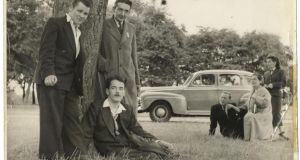 The last remaining archive of material relating to the work of Christy Brown, the Irish writer and painter whose life inspired the Oscar-winning film, My Left Foot, is to be sold at Bonhams in London on March 19th. It is estimated at £30,000-£40,000.

Brown (1932-1981) is one of Ireland’s most enduring literary figures. Born with cerebral palsy into a family of 23 children, of whom only 13 survived, he overcame astonishing odds to become an internationally recognised writer who in his life and work constantly questioned and re-interpreted the standard image of an artist.

The archive includes previously unseen sketches, paintings and unpublished poems as well as a large cache of correspondence and writings. At its core are his private letters, in particular, his lifelong correspondence with Katriona Maguire, who first met Christy in his adolescence and nurtured his love of writing and painting. The 43 letters run from 1945-1976, five years before his death. They include his most personal thoughts and observations amounting, in the words of Brown’s biographer, Georgina Hambleton, “almost to a spiritual diary”. In one crucial letter from 1952, when Christy was barely 21, he confides his ambition to become a writer and sets out the philosophy which was to guide him for much of his life.

“For sometime past I have been thinking much of my self, that is, about my worldly position. And, as usual, the unrelieved inactivity in an occupational sense… all I know is that I have always been very imaginative and aspiring even at a time when such mundane notions were considered abnormally advanced, especially in such a diminutive little creature as myself.

“I am still ambitious … But whereas before I merely dreamed of such fantasies – as they then were – I now realise the truth that it is the most futile of all human futilities to live entirely in dreams. Ridiculous to spend one’s lifetime wistfully philosophizing about life and its numerous peculiarities, indulging in mental generalisations about the things that go to make up life.

“The first great thirst of the mind is satisfaction. A sensitive mind will always strive to expand and enlarge the scope of its activity … It longs with a consummate passion to assert its right to a moral, dignified, more worthwhile destiny… Don’t dismiss this as just a frivolous caprice of the mind. Because believe me I was never of a more serious frame of mind than I am at present.”

Brown always recognised that his struggle to overcome the effects of cerebral palsy was an inescapable part of his drive for self-expression through writing and art. When asked by an interviewer what he might have achieved without his disability, Brown replied that he would have become a bricklayer like his father.

The archive also includes letters from Christy to his family and to Christy from his American friend and lover, Beth Moore, and from Dr Robert Collis, who first arranged treatment of his cerebral palsy.