Children’s books: Brighten up January with these new titles

Stories of a lost cat, a lost bird and friendships in moments of hardship and difficulty 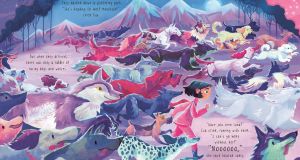 What to do to beat the January blues? Take some positive inspiration from the positive-thinking protagonists in some of the first-published books of the new year. Atinuke’s Too Small Tola (Walker Books, £5.99, 6+) is certainly a model of resilience.

Teased for her diminutive stature, Too Small Tola proves her toughness in three short episodes, where she helps her grandmother do the shopping, defeats the local bully, and overcomes her own compulsive altruism to get to school on time. Atinuke’s book is full of tiny, individual portraits, and the brilliant names evoke the kookiness of the characters.

There is Granny Mama Mighty, Tola’s inspiration; Mrs Shaky-Shaky of the galumphing gait; and nosy Mama Business, who could tell you everything about anyone in Lagos. The “mega-city” of Lagos is a vivid character too, with its busy, dusty streets, perpetual traffic, and the heaving market known as Mile 12. Onyinye Iwu’s pencil drawings provide a subtle visual complement to the bustling life of Atinuke’s busy, maths-loving, unusual heroine.

Eva, the pixie-faced protagonist of The Moonlight Zoo (Little Tiger, €12.99, 3+), has a different sort of challenge to face. Her cat, Luna, has gone walkabout, and she misses the feline’s “rocket-engine purr”, which used to lull her sleep. Searching her bedroom, Eva doesn’t find her cat, but she does find “the moonlight zoo”, a magical place, with moonbeam gates and natural wonders, and beasts big and small. It is “a place for all animals,” her wolf-guide explains: “We keep them safe at night.” Powell-Tuck’s text is full of lovely lunar metaphors, painting a wonderful picture of the alternative lives that animals live when they depart from us. Eva and Luna are reunited at the end, but the story would be a useful tool for talking about the death of a loved pet. Karl James Mountford’s peep-through illustrations, meanwhile, make inventive use of windows, torch-rays and layered page sizes to create an extra sense of visual magic.

There is a cat called Luna in Anna Hoghton’s debut, The Mask of Aribella (Chicken House, £6.99, 10+). The book opens on the eve of Aribella’s 13th birthday, when, following an encounter with a bully, flames start to fly out of her fingertips. She flees the city, but is intercepted by the mysterious, masked Rodolpho, one of a network of Cannovacci, who, with their superpowers, are battling behind the scenes to keep Venice safe from the forces of the punitive Doge. Hoghton’s exciting premise is enriched by the Venetian setting, where the deceptive cobbled streets, maze of rivers and idiosyncratic islands make it easy to slip between a realist register and fantasy. Hoghton adds her own singular details too: the derelict palace that reveals itself only to the Cannovacci is particularly memorable. Luna the cat plays only a minor role, but her reappearance near the book’s finale, redoubles the remarkable reunion that Hoghton finally grants her fearless heroine.

From the canals of Venice to the Scottish seas, where Joseph Elliot’s The Good Hawk (Walker, €6.99, 10+), the first book in a new fantasy adventure series, sees a young girl with Down’s syndrome, Agatha, serves as protector – or Hawk – for her clan. When her clan is kidnapped by invading deamhain – axe and arrow-wielding demons – she embarks upon a quest into the Scottish wilds with anxious, angler-boy Jaime, hoping to save them. Elliott shares the narration between Agatha and Jaime, with occasional poetic interludes by a character called Nathara, whose identity doesn’t become clear until the final third of the book. The chill barren setting of Scotia provides rich terrain for an unsettling wildness, which Elliott cleverly lets reign in the closing epilogue, as he pushes the remarkable Agatha’s fate – not her clan’s – to the forefront.

In Patricia Hegarty’s Little Bird Lost (Stripes, £7.99, 6+), two friends also set off on a journey through a wintry landscape, looking for a family from which one of them is estranged. Our avian protagonist is “a very brave little bird” who has lost her flock. The story “begins on a summer breeze, whispering gently through the trees”, when frolicking Deer finds a small yellow bird who has hurt his wing. Deer builds Little Bird a nest in his antlers, and after a perilous, precarious start, they start to follow the sun, hoping it will lead them to Little Bird’s family. The sun sets into autumn, which passes into winter, and finally, to spring, where Little Bird discovers his wing has healed and his flock have returned to the skies. Sebastiaan Van Doninck’s coloured illustrations have a vintage Disney feel, and they are gloriously reproduced on the luxurious glossy pages of the hardback edition, which offers a lovely lesson in the comforts of companionship.

Coral Rumble’s short standalone story Mustapha’s Jumper (Wacky Bee, £6.99, 6+) explores the challenges and joys of friendship in brutally concrete terms. Mustapha is the new boy in school. He doesn’t speak English but that doesn’t matter. As Milo discovers, “boys from other countries like playing games. Boys from other countries smile and laugh. It really isn’t a hard job to be friends with a boy from another country”. As a friendship grows between the pair, Rumble shows us how easy friendship really is, even in moments of hardship and difficulty: “sometimes sad people just want you to sit next to them. It’s not a hard job”. The devastating end of Rumble’s short story, however, raises more difficult questions about migration and the refugee crisis, which a short note at the end puts into context. There is probably no good time to have a conversation about such challenging issues, but they are the ones most worth having.