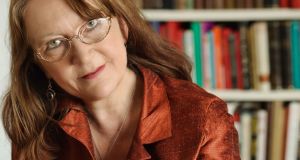 Éilís Ní Dhuibhne: “Nowadays, standards are different. There’s more acceptance of anything. Why should a story have to conform?”

Pseudonyms are not just for pseuds. They also allow established authors to publish detective stories without confusing the expectations of readers. John Banville is Benjamin Black. Julian Barnes doubles as Dan Kavanagh.

No need for such subterfuge with Éilís Ní Dhuibhne, who is widely admired for her literary reviews, short stories and novels: for crime she simply writes as Gaeilge.

She got the idea while on holidays in Dunquin in the Kerry Gaeltacht with her Swedish husband, Bo Almqvist, a folklore scholar noted for collecting material from, among others, Micheál Ó Gaoithín, the son of Peig Sayers.

It was soon after she had been shortlisted for the 1999 Orange Prize for her third novel, The Dancers Dancing. Her fourth short-story collection, The Pale Gold of Alaska, was just out. A fluent Irish speaker and voracious reader of Scandinavian police thrillers, in particular Henning Mankell’s Wallander thrillers, she imagined how the genre might work in an Irish setting, and in Irish.

Dúnmharú sa Daingean (2001) was a bestseller, as was its 2003 sequel, Cailíní Beaga Ghleann na mBláth. “My Irish is poorer than my English,” she says. “I don’t have the same vocabulary so the style is more simple, which seemed to work.”

We’re at a window table in the Gotham Cafe on South Anne Street in Dublin, looking out on a downpour, the sort of weather you get on the Dingle peninsula when clouds shroud Mount Brandon. “Bo was totally in love with Kerry,” she says. “For him, Dunquin was paradise on Earth.”

They met while she was studying old English at UCD. “I was interested in writing and felt I should read everything that had ever been written.” Almqvist became professor of Irish folklore in 1974, and his module on folklore and its relationship with literature was part of her English course. “I’d no understanding that there was an earlier literature, and that the real roots of it were in folklore.”

Ní Dhuibhne was born in 1954. She grew up in Ranelagh speaking Irish and English. “My father was a carpenter from the Gaeltacht in Donegal. He talked about it all the time. It was that other place we went to that we loved.”

She started writing aged seven. “I wanted to be like Enid Blyton, whom I loved.” At her Irish-language school, Scoil Bhríde, “they were very encouraging, and even asked me to write school plays for Christmas”. She won a UCD entrance scholarship for English in 1973, and in her second year her first short story was published by David Marcus on the New Irish Writing Page of the Irish Press.

She used a pseudonym: Elizabeth Dean. “I was embarrassed about the nuns at school reading my story. It was handwritten because I didn’t have a typewriter. I didn’t even keep a copy of it. I remember going to Poolbeg Street to David’s little office and having a chat about stories. He wanted to change the title. I’d called it something flat and uninteresting. He suggested Green Fields, which is from a poem. I told him I didn’t want to write like Frank O’Connor. It was the arrogance of youth, really. I remember he said, ‘Oh, you know, sometimes people only have one story in them.’ I was thinking, ‘Ha, I don’t want to hear that.’ ”

Marcus published several more stories while her folklore research flourished. Her studies brought her to Copenhagen for a year, where she became fluent in Swedish and Danish, before eventually returning to Ireland, where she married Almqvist and gained a PhD in 1982.

Her story Looking was published in the Sunday Independent in a monthly literary page I had started. Brendan Kennelly praised it as “quietly mesmeric in a most subdued, ordinary way. The details are good, the feeling and tone convincing.” His perception defined the writer she would become.

Until then she was torn between academia and writing. “I’d always wanted to be a writer but it didn’t seem that important to me. For seven years I’d immersed myself in research and scholarly writing and doing footnotes. I only wrote stories as they came, just one or two a year. I didn’t have a way of writing a story, or if I did it had been absorbed from the Joycean epiphany.”

With Blood and Water, the partly autobiographical title story of her first collection in 1989, she began to find her voice. “I was getting to be more in control of my characters. And the reason for this was I had discovered how Alice Monro put her stories together, with lots going on and a big time frame.”

She says she probably wouldn’t have gone back to writing if she hadn’t become aware of feminism. “I hadn’t paid much attention before, but after I was married and had two children I was introduced to the women’s studies forum at UCD and met the brilliantly radical Ailbhe Smyth. Now I had another reason to express myself. Once I found that I was determined to go on writing.”

With her early novels, the dystopian The Bray House (1990), Singles (1992), and, more successfully, The Dancers Dancing (1999), she arrived at a way of intuitively drawing on folklore and personal memories to imbue sharply observed portrayals of contemporary relationships with dark undercurrents. This proved particularly effective in Fox, Swallow, Scarecrow (2007), a Celtic Tiger morality tale. “I was sort of parallel-ing the newness of the train in Anna Karenina with the newness of the Luas.”

Visiting the Tyrone Guthrie Centre in Annaghmakerrig, Co Monaghan, she “missed my two little boys, Ragnar and Olaf, so much that I started writing stories about them”. This led to The Hiring Fair (1992), the first in a series of Bisto award-winning children’s books under the pen name Elizabeth O’Hara and featuring the Scatterbrain Sally character.

Through her teaching of creative writing at UCD, she has mentored a new generation of writers. “Nowadays, standards are different. There’s more acceptance of anything. There’s more openness. Why should a story have to conform?”

She finds she dreams in the language of whatever country she is in. “There are no frontiers in dreams.” She’s now learning Bulgarian “because one of my sons has married a Bulgarian. It’s just for fun. It will be my last language.”

Her husband Bo, who was 23 years older than her, died in 2013. “I’m writing a memoir of my time with him. After he died I didn’t feel like writing anything for a while. [Writing] seemed so trivial. But now I’m getting back to it.”