Annie Fletcher: On My Culture Radar

Director of Irish Museum of Modern Art on her picks for Venice Biennale, a podcast on the politics of tech, and her girl crush on Cate Blanchett 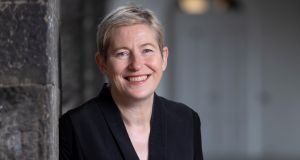 Annie Fletcher: ‘I have a huge girl crush on Cate Blanchett. I think she’s brilliant, and is very fashionable and beautiful.’

Current favourite book
As a thinker and intellectual, James Baldwin was so amazing and driving, and I’ve been re-reading The Last Interview: And Other Conversations. It was a book based an interview by the poet Quincy Troupe in the south of France at the end of James’s life. It also covers him being friends with the likes of Miles Davis, Toni Morrison and Richard Wright. He’s a searingly honest thinker, especially at this time when he has nothing left to lose.

Restaurant
The Winding Stair in Dublin has always been a meeting place for artists, intellectuals and poets. It’s over three storeys with a bookshop on the bottom floor, plus wooden floors, high ceilings, huge windows that look out to the Liffey. In the last few years, the owner Elaine Murphy has managed to restore it in keeping with its historical importance. The menu has things like pork belly and duck leg, and they do good vegetarian options like cauliflower and cheese croquettes. It’s well-sourced modern Irish food.

Comedian
I offer two extremes: Frankie Boyle, who might be controversial but I think he’s so acerbic and it’s interesting to see how his mind works, and like many people, I loved Hannah Gadsby’s Netflix special Nanette. I loved her intelligence in dismantling the typical structure of comedy.

Artist/designer
It feels unfair to single out an artist, but I’m very excited about a show I’m working on by the London-based Otolith Group, founded by artist Anjalika Sagar and theorist Kodwo Eshun. It’s called Xenogenesis, which is based on Octavia Butler’s futurist science fiction, and it’s the first ever solo exhibition of their work. They make you think about everything again from racial politics to “generative alienation”. I think they’re revolutionary artists. It opens in the Van Abbemuseum in the Netherlands at the end of May, and then it will come to Dublin in April 2020.

I’m also going to the Venice Biennale this week. I’m biased but I really believe the Irish Pavilion is special, with Eva Rothschild who’s an elegant, complex sculptor. And I’m excited by the French Pavilion with Laure Prouvost. I was on the jury when she was given the Turner Prize in 2013, and she’s gone from strength to strength with whimsical, hilarious and passionate pieces, and incredibly intense installations. I haven’t seen such vibrant sculptural work in a long time.

City
I’ve been going to Istanbul on and off since 2005, and I adore it. It’s a huge city with wonderful food, an incredible history and 20 million people milling around. It’s on the borders of Europe and Asia, and that’s so affecting. Plus the artists are simply brilliant; it’s a difficult time and there’s lots of censorship emerging, but the intellectuals are buckling down.

Actor
I have a huge girl crush on Cate Blanchett. I think she’s brilliant, and is very fashionable and beautiful.

Podcast
I’m obsessed with podcasts. I like Recode Decode by Kara Swisher, on the politics of tech. She’s a journalist but also an entrepreneur, and she understands Silicone Valley and all of the emergent worries around AI. She often showcases a lot of women entrepreneurs and tech people, and she’s a funny, honest and direct journalist who isn’t afraid of asking awkward questions. I wouldn’t have known much about tech, but given how important it is, I’m glad this podcast is here.

For politics, Mueller, She Wrote helps get through the horror of Trump. It’s three women, A.G., Jaleesa Johnson and Jordan Coburn, who pore over the indictments and legal readings since the Mueller investigation launched two years ago. They’re funny – they have indictment bingo on who’s going to go down next, for example. They also show how politics is negotiated through incredible corruption and grifting, which is fascinating to understand.

TV show
Like everyone else, I’m obsessed with Game of Thrones. And I love Derry Girls. It reminds me so much about growing up – the humour, the nuns, the whole lot. I like that they don’t play towards the male gaze; they are themselves as young, awkward, beautiful teenage girls. In this climate, I’m glad there’s more attention to this complicated history of Northern Ireland.

The Irish Museum of Modern Art (IMMA) will be taking part in the Culture Date with Dublin 8 festival on Saturday, May 18th to Sunday 19th. See culturedatewithdublin8.ie.