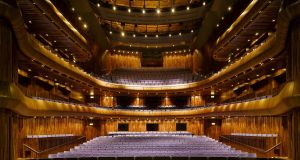 The National Opera House in Wexford. Money was a major factor in the building taking on the ‘national’ moniker in 2014.

Opera magazine describes itself as “the world’s leading commentator on the lyric stage for over 65 years”. If anything moves in the world of opera, the magazine is interested.

It is just a little older than Wexford Festival Opera, which is cast in the spotlight in John Allison’s editorial in the magazine’s May issue. Allison is the youngest person in a list of “distinguished critics who have covered Wexford” named last year by the festival’s artistic director, David Agler.

The editorial expresses concern that “all is not rosy” at Wexford. Allison writes: “Having lost a worrying €600,000 in 2018 – translating as a 21 per cent cut to the artistic budget for 2019 – it is still waiting to hear from an enigmatically silent Arts Council of Ireland about this year’s grant. The Arts Council’s other major decisions were revealed in February, but Wexford (awarded €1.45 million in 2018) didn’t feature on the list.”

“Wexford,” he goes on, “may be home to the country’s National Opera House, but this small town of 20,000 people cannot afford to run the building unaided, and it is yet to see last autumn’s promised €1 million maintenance grant.”

Understandably, the editorial was out of date even when it was published last month. The Arts Council received the assurance it was clearly holding out for from Wexford, and the festival’s 2019 grant has been set at exactly the same level as last year.

It’s surprising that someone in Allison’s position has not worked out that Ireland’s National Opera House is a national opera house in name but not in reality. And money was a major factor in the change of name five years ago.

In the early years of the century, when seeking public funds for its new building, Wexford determinedly kept the Arts Council out of the loop, and dealt directly with the Department of the Taoiseach.

The success of that strategy was a great coup, and delivered capital funding of more than €30 million. But it has left the festival in the position of finding it difficult to get Arts Council funding for its venue as well as its festival. The Helix in Dublin City University and the University Concert Hall, Limerick, have long suffered a similar fate.

The Wexford Opera House opened in 2008 and it was not renamed as the National Opera House until 2014. Only the name was new, and the change seems to have been a ploy to give the festival the aura of national cultural institution with an eye to receiving maintenance support via a public funding route other than the Arts Council.

There’s no law about businesses using the word national in their names. The Companies Registration Office lists hundreds of national thises and national thats. Yet the staging of Wexford’s new name in 2014 involved the then minister for arts, Heather Humphreys. She gave the renaming her “full support”, and said: “I have asked my officials to work with Wexford and the Arts Council to put this into effect, in recognition of Wexford’s position as the home of Ireland’s only custom-built opera house.”

When I asked the festival if there is a problem or delay in the payment of the €1 million Department of Culture maintenance grant announced last October, they said, no. The grant, they explained, is for a three-year period, 2019-2021, and: “As per the service level agreements for all such grant payments are claimed on a retrospective post-expenditure basis and in-line with the department’s procurement requirements.”

The Opera magazine article’s big surprise to most opera lovers will have been the mention of a €600,000 loss in 2018. Wexford has confirmed that reduced box office demand, reduced development income and high production costs did lead to a trading deficit. The festival, I was told, “is implementing a business plan and following an approved budget aimed at producing a trading surplus in 2019”.

The festival would not confirm the amount of the 2018 loss, but reliable sources say that if you combine the projected 2018 trading surplus with the actual trading loss, the discrepancy is in excess of €800,000. The cutbacks imposed on a shortened 2019 festival led to a resignation letter from Agler (subsequently withdrawn) and a repertoire change, with Carl Maria von Weber’s Der Freischütz being replaced with the less expensive option of Antonio Vivaldi’s Dorilla in Tempe.

A figure of €600,000 amounts to more than 40 per cent of Wexford’s most secure income stream, the annual Arts Council grant. The festival has been at this kind of precipice before, even if the challenge has never been quite as stark.

The festival’s annual Arts Council grant, as documented in the council’s annual reports, shows a remarkable consistency. It has held more or less steady since 2008, in spite of the fact that the council’s own support from government had fallen by 30 per cent by 2014, and savage cuts were being visited on the arts sector.

The festival ascribes its previous high loss in 2016 to a change to the Arts Council’s accounting year, the second change in five years. The only way for the Wexford explanation to make sense would be if the festival allocated the 2012 portion of the 15-month grant it received for January 2011 to March 2012 to artistic costs from the calendar year 2011 and thereby found itself tripped up by the reversion to the calendar year via a nine-month grant in 2016. Its annualised funding held steady.

This seems to be confirmed by the festival’s statement: “The audited income in these 2016 accounts includes a reduction of €355k in Arts Council funding dropping from €1.420m in 2015 to €1.065m towards the 2016 festival, whereas total artistic costs in the nine-month audited period directly relating to the presentation of the 2016 festival rose by €33,710.”

Whatever way you look at it, Allison’s concern is well founded. The current deficit is real, and one of Ireland’s most renowned arts institutions is going to need all its considerable nous to turn around the situation it finds itself in.

Inside the dark web: ‘The truth is there is a lot of evil out there’
7

Dancing with the Stars: Why are people voting for Fr Ray Kelly?
10