Travel company TUI to shut 166 stores in UK and Ireland 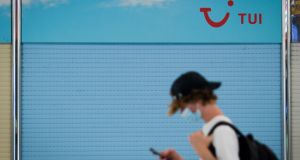 TUI UK and Ireland said in May it would aim to cut costs globally by 30 per cent, affecting up to 8,000 roles. Photograph: Jaime Reina/AFP via Getty Images

Travel company TUI said it will shut 166 stores in the UK and Ireland in response to the downturn in travel caused by the coronavirus pandemic, in a move which could lead to some job losses.

It is not yet clear how its Irish operations will be impacted by the closures. TUI has 10 stores here, but did not confirm the number of people employed in Ireland.

After the closure, 350 stores will remain in TUI’s retail network throughout the UK and Ireland.

The Germany-headquartered company said that it would seek to move 70 per cent of the 900 staff affected by the closures to homeworking sales and services roles, and it would aim to relocate other employees in the remaining high street stores.

Managing director of TUI UK and Ireland Andrew Flintham said it was “imperative” to make difficult decisions on costs, with customers increasingly opting for online bookings.

“We believe Covid-19 has only accelerated this change in purchasing habits, with people looking to buy online or wishing to speak with travel experts from the comfort of their own home,” he said.

The company previously announced in May that it would aim to cut costs globally by 30 per cent, affecting up to 8,000 roles, as it tried to accelerate its efficiency plan and continue with its digitalisation programme. – Additional reporting: Reuters