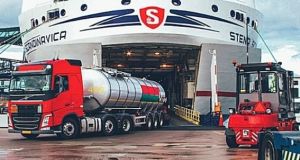 Ferry company Stena Line is to furlough 600 employees and make 150 redundant across Britain and Ireland.

Stena Line said the measure was an unavoidable response to the coronavirus crisis and its impact on travel and transport in Europe. It warned there could be more cost-cutting measures on the cards as the crisis continues.

“With no end to the crisis in sight, Stena Line is planning for the long term,” it said in a statement.

The company employs about 2,500 people in the United Kingdom and Ireland and makes more than 250 crossings per week across the Irish Sea, carrying 750,000 freight units annually.

Overall, some 80 per cent of Irish exports travel through the three ports Stena Line owns: Holyhead, Fishguard and Cairnryan in Scotland.

The announcement of furlough and redundancies follows a reduction in the number of sailings on several routes and as many vessels have been taken out of service.

Stena Line recently saw a temporary lift in freight capacity linked to consumer stockpiling early on in the coronavirus crisis. However, it has lost 80 per cent of passenger traffic and freight volumes have also declined.

In a statement, Stena Line said it did not expect passenger figures to recover “until well into 2021”. It said due to the loss of revenue it had been forced to take tough decisions to cut costs and ensure that vital supply lines of essential goods are protected.

“The Covid-19 crisis has meant that Stena Line is experiencing a significant decline in passenger and freight volumes across all its 20 European routes. We are having to make some very difficult decisions, that we hoped we would never have to make.” said Ian Hampton, director of Stena Line.

Staff who have been furloughed will receive 100 per cent of their salaries, through a mixture of State subsidies and company payments, Stena said.

With cross-border travel effectively closed in continental Europe, Stena Line announced over 950 job losses last month. Employees locally and in Britain had been spared the cuts, however, as passenger crossings across the common travel area are still operating, albeit at a reduced rate.

“We will do everything in our means to ensure essential supply lines stay operational during what is a very difficult time for the company and the countries that we serve,” said Mr Hampton.