Sberbank injects $49m of additional capital into its Dublin subsidiary 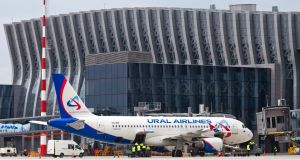 An Ural Airlines aircraft. In June SB Leasing Ireland agreed to lease 14 new Boeing 737 Max-9 aircraft to the airline in a transaction worth $739m over 12 years. Photograph: Getty Images

Sberbank, Russia’s largest lender, is expanding its Irish aviation leasing business even as losses stack up and as the US prepares new sanctions which may curtail its activities and ground Russian aircraft.

The state bank, which controls 46 per cent of all Russian deposits and a third of all loans, has been subjected to strict European and US sanctions since the Kremlin annexed Crimea in 2014. US policymakers are now threatening Sberbank and other Russian banks with further prohibitions in “a sanctions bill from hell” which may hinder trading in Russian bonds and ground the US-bound fleet of the flagship carrier Aeroflot.

However, Sberbank’s little-known aviation leasing arm SB Leasing Ireland has not yet been affected, and is now growing its fleet with a fresh $49 million (€43m) capital injection from its Moscow parent, according to the latest accounts filed with the Companies Registration Office on September 26th.

The company, which was set up in Ireland in 2010, keeps a low profile, and has been losing money in recent years. The accounts show SB Leasing recorded a pre-tax loss of $2 million in 2017, following a loss of $5 million for the previous year.

But the business could turn a corner. Assets in operating leases jumped last year to $661 million from $88 million as the company entered into 12 new lease deals to take its overall number to 47 compared to just three new leases in 2016.

In June, the company completed one of its biggest deals after agreeing to lease 14 new Boeing 737 Max-9 aircraft to Russia’s Ural Airlines in a transaction worth $739 million over 12 years.

Deliveries of the aircraft, which will be acquired by SB Leasing, are scheduled between October 2019 and May 2022. The accounts show the company paid Boeing advance payments of $255 million in 2016, and a further $150 million last year.

To help support the business 490,000 shares of $1 were issued by SB Leasing to its parent in exchange for a payment of $49 million.

“The directors of the company are satisfied the company will be profitable in the long term,” said directors James Duggan and Katerina Ryzhenkova in the filing. “Based on projected financial activity, the company income expects to generate stable taxable income from 2018.”

In a statement to The Irish Times about the results of its subsdiary in the Republic, Sberbank said: “Our financial losses in 2017 were caused by a significant increase of the company’s activity and therefore, the need to increase capital. The first half of 2018 was profitable for the company, and we are confident in the prospects of the business.”

Sberbank is not the only Russian player in town. In March The Irish Times revealed that GTLK Europe, the Kremlin’s dedicated-leasing operation, was expanding by opening a dedicated finance arm in Dublin to compliment its existing business, which manages a portfolio of air and sea vehicles worth over $1.5 billion. VEBL Europe, a unit of Russia’s development bank, and VTB, the nation’s second biggest lender, also have bases in Dublin.

Sberbank, which is run by President Vladimir Putin’s former economy minister Herman Gref, has been retreating from central and eastern Europe and sold its Turkish Bank in May for $3.5 billion. However, IntelliNews reported on October 2nd that the lender had injected $104 million into to its London investment bank despite concerns about sanctions and Brexit.

Russian banks are drawn to Ireland due to its status as the birthplace of aircraft leasing, and being recognised as the number one location globally in the sector, with most of the leading lessors long present in Dublin. About 40 per cent of the world’s commercial aircraft fleet are currently leased, and the IDA estimates that around 60 per cent of these leased aircraft are owned and managed from Ireland.

Sberbank’s expansion comes as the Irish Government tries to attract more aviation business from Russia. In March, Irish diplomats and officials attended the the MRO aviation trade fair in Moscow, where both Enterprise Ireland and Dublin Aerospace had a stand.

On October 28th, Aeroflot will launch a daily direct service from Moscow to Dublin in a move which is hoped will greatly boost trade and tourism between the two countries.

“This new direct air link to Russia will open up a positive range of opportunities for Irish tourism businesses,” a spokesman for Fáilte Ireland told the Irish Times. “Through its Business Supports team, Fáilte Ireland is available to discuss how best to explore those opportunities for tourism businesses interested in the potential of the Russian market.”

An Aeroflot source rejected rumours that the airline needed an Irish stopover as a hedge against potential US sanctions. The company’s shares plunged 12 per cent on August 9th after the US state department threatened sanctions that could ground all of its flights to the US following alleged Kremlin interference in US elections. Both GTLK Europe and SB Leasing work closely with state-controlled Aeroflot.

While Russian airlines have thus far been exempt from sanctions over Ukraine, Russian banks, such as Sberbank, VEB and VTB, are subjected to tough restrictions on accessing any financing on international capital markets.

Analysts are surprised that this has so far not restricted them from leasing out aircraft manufactured in countries outside Russia. “This is because leasing companies operate as separate entities from the banks and they don’t face all these challenges,” said Elena Sakhnova, an industrials and transport analyst at VTB Capital in Moscow

Despite problems overseas, Sberbank is raking in record profits thanks to its near-monopoly position at home and as its legacy as the Soviet Union’s piggybank. The lender, which has about 300,000 employees and 14,000 branches, posted record 750bn rouble ($11.5bn) profits last year.

1 Getting out from under ‘never-ending’ Celtic Tiger debt burden
2 Brittany Ferries ends Cork-Santander route
3 Fair Deal nursing homecare leaves little for bills and gifts
4 Pensions: Estonia plans to unleash a potential €4.85bn on economy
5 Explainer: what is the row about SF’s multinational tax plan?
6 Banks withdrawing from ATMs – another failure of regulation
7 Britain after Brexit will not be alone, but it will be lonelier
8 Building lobby criticises election promises on housing
9 More affordable iPhone 11 is unlikely star of Apple earnings
10 Election 2020: Parties' pledges on housing simply don’t add up
Real news has value SUBSCRIBE