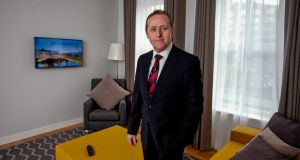 International hotel manager Prem Group has launched a business to sell coach tours and group bookings to independent hotels across Ireland and Britain.

The company, which owns Cahernane House Hotel in Killarney, Co Kerry, launched the Trinity Hotel Groups brand on Thursday. For a set annual fee, the company will field inquiries from tour operators and sell rooms for independent hotels.

“Dublin is often seen as too expensive for coach tour business, but we can show operators that value can be found in smaller cities and towns,” he added.

Last year the business, which formerly traded under the brand Trinity Hospitality, placed more than €9 million worth of group business into partner hotels.

Mary Daly, the brand’s manager, noted that the group and coach tour segment of the market could be difficult to reach for many hotel owners.

“We spend up to six months of the year travelling abroad meeting tour operators and have built up great relationships with these operators,” Ms Daly said.

Prem Group is the parent to multiple business units, including Prem Hospitality, which owns, leases and manages more than 50 hotels.

Other hotels in the Republic it owns include the Tulfarris Hotel and Golf Resort in Co Wicklow, the Osprey Hotel in Co Kildare and the Aspect Hotel in Co Kilkenny.