TikTok’s Irish move, Ryanair’s Italian clash and a verdict on the Oura ring 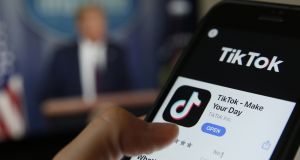 TikTok, the video app that has exploded in popularity this year, is to invest $500 million (€420 million) in a data centre in Ireland and create “hundreds of jobs” locally. The company, which is in talks with Microsoft to sell its US operations, plans to store its European users’ data at the centre, Charlie Taylor reports.

Ryanair has clashed with Italy’s air travel regulator Enac, which has threatened to ground the airline’s flights for what it says are breaches of Covid-19 safeguards. Ryanair says it has complied fully with all anti-virus measures set by the Italian government, Barry O’Halloran reports.

In her Net Results column, Karlin Lillington explores the fallout from the at times stuttering performance of tech giant CEOs at last week’s Congress hearing.

In her weekly tech review, Ciara O’Brien examines the Oura ring, a wearable health tracker that pinpoints sedentary lifestyles and bad sleeping patterns – and maybe even the first signs of Covid-19 too.

And is your wifi slow and buggy? The reason could be anything from thick walls to third floors to the location of your modem.

Bank of Ireland is to cut more than 1,400 jobs in the coming years, it said on Wednesday. The Financial Services Union has sharply criticised the bank for launching a voluntary redundancy scheme with a September 23rd closing date, saying the deadline is “totally insensitive”. Joe Brennan reports.

Finally, in Innovation, Olive Keogh talks to some of the entrepreneurs to graduate from the latest social enterprise incubator run by the Irish Social Business Campus.Stay up to date with all our business news: sign up to our business news alerts and our Business Today daily email news digest.

1 Michael O’Leary is the boss you want to lead an airline out of crisis
2 Should I switch bank now with Ulster Bank at risk of closing?
3 Ireland is in danger of losing the woods for the trees on emissions reduction
4 Over 36,700 employers register for new Covid wage subsidy scheme
5 The wealth of the Irish – how do your assets match up?
6 Irish company to test vaccines on volunteers deliberately infected with Covid-19
7 High Court told FBD staff texts discussed policies in ‘disparaging terms’
8 Virgin Media’s Gavan Reilly named most influential Irish journalist on Twitter
9 Apple ruling welcomed, but industry expects glare to fall on Ireland’s tax regime
10 Estée Lauder staff at Dublin airport plan further strike action
Real news has value SUBSCRIBE