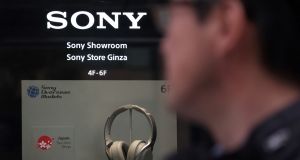 Sony said on Tuesday it expects to book record annual profits as the once-ailing electronics giant pushes on with a turnaround driven by its PlayStation games division and a booming smartphone parts business. Photograph: Kazuhiro Nogi/AFP/Getty Images

Japan’s Sony Corp lifted its full-year operating income forecast on Tuesday, expecting to book its highest-ever profit due to strong sales of image sensors used in smartphones and other devices. The electronics firm forecast profit of 630 billion yen ($5.57 billion) for the year ending March, from 500 billion yen estimated three months ago.

Meeting the new forecast would mean Sony exceeding its previous record of 526 billion yen set in the year ended March 1998.

A business overhaul refocusing on image sensors and games under chief executive Kazuo Hirai has moved Sony out of a decade of doldrums and boosted the firm’s stock price to nine-year highs. But the stock price has plateaued in recent months as investors have become sceptical about Sony’s growth potential in coming years, when a profit boost from the earthquake recovery disappears and the PlayStation 4 console enters the late stage of its life cycle.

Hoping to grow future profit pillars, Sony has been boosting investment in artificial intelligence to catch up with US tech giants such as Amazon and Alphabet’s Google.