Tax relief on dining out expenses a flop 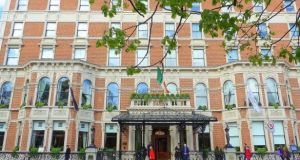 Taxpayers could have saved €250 on a night in The Shelbourne through Stay and Spend.

A tax incentive aimed at boosting consumer spending in the hospitality sector failed to take off last year, as new figures show the scheme ran aground amid tightening Covid-19 restrictions.

Stay and Spend was introduced in October to boost hotels, bars and restaurants by offering tax relief on money spent in the sector. It was initially expected to cost the Government about €270 million, based on total spending by some 2.15 million consumers of about €1 billion.

However, figures from Revenue show that the scheme has significantly failed to meet expectations, with a total spend of just €6.8 million up until January 18th 2021, based on some 43,196 receipts uploaded to the Revenue’s receipts tracker.

This would suggest a total cost to the exchequer of €1.4 million, based on tax relief at a rate of 20 per cent, if all these claims are made.

However, according to Revenue, just 4,441 claims have been made to date, with a total spend of €1.5 million. This means that the scheme has thus far cost the exchequer just €305,430.

Timing
The timing of the scheme is likely a key reason for why it has had such limited success. Indoor dining was banned in Dublin in September, and was later extended across the country in early October, only returning for a brief period over Christmas.

In addition, taxpayers can amend their tax return at any time up to four years after the relevant date.

Taxpayers who spent the maximum allowed (€625 per person/€1,250 per couple) and kept their itemised receipts will now be able to claim €125/€250 on their income tax forms they may be filing this month, thus reducing any outstanding liabilities they may have.

Possible extension
Stay and Spend is due to run out at the end of April but may be extended, given it is nigh on impossible to benefit from the scheme at present because of the countrywide lockdown.

While coffee shops such as Costa (you can see the full list of participants here) have signed up to the scheme, the minimum spend is €25, which may be difficult to reach with a sandwich and a coffee. In addition, the relief can’t be claimed against takeaways.

Speaking in the Dáil earlier this month, Minister for Finance Paschal Donohoe alluded to such an extension when he said he had the “flexibility” to prolong it.

“However, it is too early as yet to take any decisions in that regard. Much will depend on how matters unfold in the weeks and months ahead,” he said.

The UK ran a similar but simpler scheme last summer, “Eat out to help out”, which had the similar goal of boosting hospitality by incentivising people to go out. It offered a 50 per cent discount on the cost of food or non-alcoholic drink up to a maximum of £10.

It was a runaway success, costing the treasury some £850 million – two-thirds more than had been budgeted for. However, it was blamed by some as offering a launch pad for increased Covid-19 infections.