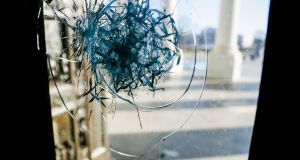 Shattered reinforced glass in the US Capitol in Washington DC. Photograph: Shawn Thew/EPA

The US has recently witnessed armed insurrection, Donald Trump becoming the first president in history to be impeached twice, and mounting fears of violence prior to Joe Biden’s inauguration. Amid talk of sedition and civil war, stocks keep rising. Why don’t investors care?

The simple reality is markets fret about earnings and interest rates and so on but tend to be nonchalant about socio-political upheaval. Stocks were higher within two days of JFK’s 1963 assassination; shrugged off mass protests and upheaval in 1968; ignored race riots in Los Angeles in 1992; regained pre-September 11th levels by November 2001; and kept rising as mass unrest swept the US following George Floyd’s killing last May.

It may sound cold but investors should remember there is, as Ritholtz Wealth Management’s Josh Brown puts it, “nothing there from an investing perspective”.

RTÉ confirm presenter Eoghan McDermott will not return to radio show 13:52
Davy scandal Q&A: The who, what, where, when and why? 13:19
Asian shares rise on back of US stimulus bill 13:10
Brussels approves €55m scheme for Irish tourism 12:47
Cold and flu remedy sales dip 55% on social distancing 12:46