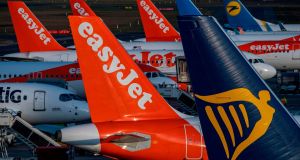 Easing tensions in the Middle East and hopes that the US and China will sign the first phase of a trade deal next week lifted shares across Europe on Thursday.

Ryanair advanced 2.53 per cent to €15.215 as airlines proved all the rage with the risks of a full-blown Middle East crisis receding.

Mining company Kenmare Resources gained 3.69 per cent to €2.81 despite reporting a fall in the production of minerals from its Mozambique mine.

Insulation and building materials specialist Kingspan shrugged off bad news from the sector in the UK to gain 0.54 per cent to €55.50. The company’s shares hit a high of €55.55 during the day’s trade.

House builder Cairn Homes slipped 0.77 per cent to €1.292 while rival Glenveagh, which issued a positive trading statement earlier this week, shed 1.6 per cent to €1.19.

SIG said in a trading statement that underlying profit before tax for 2019 would be £42 million sterling, £20 million less than the £62 million predicted by analysts.

The group’s shares tumbled 20.93 per cent to 94.25 pence sterling as a result of the warning on Thursday.

The news dragged down Irish builders’ merchant, Woodies DIY owner, Grafton, which is listed in London and does significant business in Britain. The group ended the day 3.98 per cent down at 845p.

News that Irishman Willie Walsh would depart as chief executive of International Consolidated Airlines Group in June failed to dent investor interest in the owner of Aer Lingus and British Airways. Its stock added 2.62 per cent to close at 634.6p as aviation shares enjoyed a buoyant day across Europe. Budget carrier Easyjet climbed 2.2 per cent to 1,438.5p.

Air France KLM climbed 4.03 per cent to €9.82 while German group Lufthansa moved 3.99 per cent ahead to €16.16 as both benefited from positive sentiment towards airlines.

Brussels-listed Argenx led gains on the pan-European Stoxx 600 after the antibody therapeutics developer updated its 2020 pipeline and flagged positive results from a midstage study. Its stock closed 6.28 per cent up at €150.70.

A 1.3 per cent gain for Germany’s trade-sensitive DAX stood out among European indices. The gauge also benefited from data showing better-than-expected industrial output in November that dispelled any remaining worries about a recession in Europe’s economic powerhouse.

Wall Street hit record highs on easing global tensions. Investors snapped up market heavyweights including Apple, Microsoft, Amazon. com, Google owner Alphabet, and Facebook, all of which have Irish operations, lifting their shares between 0.9 per cent and 2 per cent. Technology stocks rose 1 per cent, the most among the major S&P sectors.