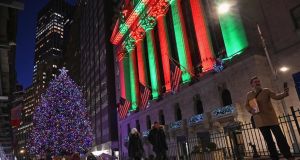 The S&P 500 extended its run of record highs for the seventh straight session in the first few hours of trading on Friday. Photograph: AFP

European stocks came close to a record high on Friday as further confirmation of a January 31st Brexit date meant investors bought into markets that have been rocked by uncertainty for more than three years. Wall Street also rose amid improved levels of optimism on global trade.

The Iseq rose 0.7 per cent in line with European markets to round out a busy week of pre-Christmas trading. The banks saw high transaction volumes at the closing auction, with Bank of Ireland adding 2 per cent to finish at just below €4.98, and AIB closing 1.7 per cent lower at €3.14.

Kingspan had a strong day, with the insulation company finishing at €53.75, up 3.3 per cent.

Kerry continued its recovery since it emerged at the start of the week that it had lost out in the race to buy the nutrition business of US chemicals group DuPont. The stock rose 0.5 per cent to €113.00, taking it back up to last week’s trading levels.

The FTSE 100 inched 0.1 per cent higher on Friday after enjoying its best weekly performance since December 2016, as shares of exporters continued to benefit from a subdued pound. The FTSE 250 managed to squeeze in a 0.04 per cent gain as prime minister Boris Johnson won approval for his Brexit deal.

London-listed shares of Carnival climbed 6.8 per cent, topping the blue-chip index after the cruise operator gave a better than expected profit forecast.

Shell dipped 1.6 per cent, becoming the biggest drag on the FTSE 100, after it said it expected to write down up to $2.3 billion in the fourth quarter. It also lowered its oil products sales forecast and indicated it would keep a lid on capital expenditure.

Former Euronext Dublin stock C&C experienced heavy volume in the auction as it is set to join the FTSE 250 in an index rebalancing. The drinks group closed up 0.9 per cent at 405 pence, after almost 19 million shares changed hands.

The pan-European Stoxx 600 rose 0.7 per cent, coming just a few points off a record peak touched earlier in the week.

Milan-listed shares outperformed regional peers for the day, touching their highest in more than 1½ years on gains in Italy’s biggest utility, Enel. Its shares rose 1 per cent after Moody’s improved its outlook on the Latin American unit Enel Americas to positive.

Italian payments group Nexi gained 2.4 per cent after Intesa SanPaolo on Thursday said it was selling its retailers’ payment business to Nexi in a €1 billion deal.

France’s Cac 40 touched its highest level since July 2007, rising nearly 0.7 per cent. Cosmetics maker L’Oreal was the best performer on the index. The Dax rose 0.8 per cent in Germany,

The S&P 500 extended its run of record highs for the seventh straight session in the first few hours of trading on Friday, as investors were optimistic about US-China trade relations and the strength in domestic consumer spending.

Markets were expected to be volatile due to “quadruple witching”, where investors unwind positions in futures and options contracts before their expiration.

Nike fell nearly 2 per cent, after the world’s largest sportswear maker reported lower-than-expected growth in revenue from north America. Carnival rose 7.3 per cent, and was the biggest percentage gainer on the S&P 500, after the cruise operator forecast a 2020 profit largely above estimates.