European shares fall as markets prepare for another turbulent day 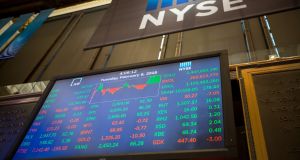 Aftershocks from the global stock selloff continued to reverberate around markets on Thursday, with European shares falling, Asian equities rising and US futures swinging from a loss to a gain.

The yuan dropped the most since August 2015 amid speculation policy makers will step up efforts to rein it in after trade figures missed estimates.

The Stoxx Europe 600 Index opened lower, with miners leading the retreat. Earlier, shares in Japan closed higher after a turbulent session while China’s stocks fell for a third day, even as Hong Kong equities climbed.

SandP 500 Index futures were up after dropping early in Asian trading. US 10-year Treasuries were steady after weak demand at a bond sale Wednesday pushed the yield back toward the recent four-year high. The pound was flat before a Bank of England rate decision.

Traders remain on edge after the resurgent threat of inflation and higher bond yields triggered a burst of volatility and a pullback across the overheated global equity market. Against a backdrop of solid fundamentals - synchronised growth and strong corporate earnings - investors would normally step in to buy the dip, but government rates remain under pressure and this week’s Treasury auctions have underwhelmed, raising the prospect that the debt selloff could resume.

“There are a lot of risks ahead and we’ve been lulled into a false sense of security over the last couple of years with central banks keeping rates low for a very long time,” Steve Goldman, Kapstream Capital head and portfolio manager, said on Bloomberg TV. “Risk assets are going to continue to perform well albeit with a lot more volatility than what we’ve seen in the past.”

In Asia, the yuan fell the most since the currency’s devaluation in August 2015 after China reported a much narrower-than-expected trade surplus as imports jumped. The country has resumed its Qualified Domestic Limited Partnership plan after a two-year halt, granting licenses to about a dozen global money managers that can raise funds in China for overseas investments, Reuters reported on Thursday, citing people it didn’t identify.

Increasing imports and investment overseas both contribute to a weaker currency.

Elsewhere, the New Zealand dollar fell after the central bank delayed the timing for when it expects to reach it’s inflation target and cut its growth forecast. Oil extended a slide after a report showing record crude production from US fields. - Bloomberg