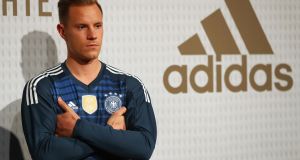 Sales growth at Adidas slowed faster than analysts had expected, sending the shares to their steepest decline in 12 weeks.

Revenue advanced 8.7 per cent, less than half the 20 per cent booked in the second quarter, and below the average 9.5 per cent analyst estimate collected by Bloomberg. The shares fell 2.3 per cent to a three-month low during early morning trading on Thursday in Frankfurt.

Operating profit still advanced by more than one-third to €795 million, beating analyst expectations, as it sold more expensive products, and sales of footwear advanced 14 per cent. Revenue in North America grew 19 per cent to €1.1 billion, an all-time high.

“So far we have grown every quarter this year with 30 per cent plus in the US, and we are not seeing any slowdown,” chief executive Kasper Rorsted said in an interview with Bloomberg TV. “We continue to see very, very strong demand for our products, and we continue to expect a very strong fourth quarter. It’s clear we are gaining market share in the US.”

For the full year, Adidas reiterated its targets, which call for revenue adjusted for currency swings to rise 17 per cent to 19 per cent, and net income to advance by as much as 28 per cent. Adidas said its gross margin in the third quarter reached a record 50.4 per cent. – Bloomberg