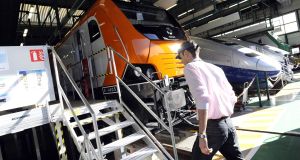 The French state has approved the planned merger of Alstom, the French high-speed train maker, with Siemens’ rail unit, in a deal that would see the German industrial group own half of the new company, according to people directly involved in the talks.

The transaction, which could be announced as soon as Tuesday by the two companies, would signal a shift in France’s policy of industrial intervention under President Emmanuel Macron in favour of creating of “European champions” - even if that means selling industrial assets that were once deemed strategic.

As part of the deal, the French state would not exercise an option to buy the 20 per cent stake in Alstom that Bouygues, the construction group, had lent it in 2014. Socialist economy minister Arnaud Montebourg had negotiated the call option in a bid to show that the state kept a firm grip on the maker of the high-speed Trains a Grande Vitesse, or TGV, despite the sale of the company’s turbine unit to General Electric.

French advisers depicted the plan as proof of a renewed Franco-German entente, just as the Europhile Mr Macron is seeking to convince Berlin to back ambitious reforms of the eurozone in a speech on Tuesday.

Siemens is expected to own about 50 per cent of Alstom shares following a capital increase. The merged entity would generate combined revenues of €16 billion. The deal would provide a bulwark against the expansion of Chinese rail company CRRC, which analysts estimate could outspend Alstom on research and development by a factor of seven to one.

“Post the creation of Chinese rail giant CRRC in 2015, Siemens has been even more vocal about the need for consolidation in the European rolling stock market,” said Barclay’s James Stettler.

Alstom, Siemens and the French government declined to comment.

Paris has steered the discussions since Henri Poupart-Lafarge, Alstom chief executive officer, alerted the French government he planned to initiate merger discussions with Siemens about a month ago.

Mr Poupart-Lafarge’s move was triggered by talks of a tie-up between Siemens and Bombardier, the Canadian company, that threatened to leave Alstom in a weaker position to compete with larger Asian rivals.

They noted that Paris worked with the German government and secured guarantees from Siemens that some plants, including Alstom’s historic factory in Belfort, would not be closed down for at least four years.

Mr Poupart-Lafarge is to head the new entity, which will remain listed in Paris. Strategic business decisions will require a qualified majority of the company’s board directors, according to a company insider. The French government will not own a stake but will be able to exert some influence because state owned railway company SNCF will remain one of Alstom’s largest clients, the advisers pointed out.

Long regarded as a symbol of France’s industrial prowess, Alstom produced its first steam locomotive in the 1880s and helped France pioneer high-speed rail travel in Europe with the TGV. But over the past 13 years, the fate of Alstom has often lay in the hands of the French state. The company was rescued from bankruptcy by the government in 2004. A decade later, the company was split and its turbine unit sold to GE under Mr Montebourg’s supervision.

Last year, the French Socialist government spent nearly €500 million on high-speed trains the country did not need to prevent the closure of the Belfort plant by the company. Once delivered, the state-of-the-art TGV trains, which run at 320km an hour, will be put on regional tracks where the maximum speed is 200km an hour at best.