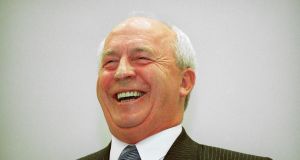 The late Howard Kilroy, who served as governor of Bank of Ireland’s court of directors from 1991 until 2000. Photograph: Bryan O’Brien

Irish businessman Howard Kilroy has died aged 83. He was best known as the chief financial officer of the Smurfit Group during a period of major international growth for the packaging company.

He also served as governor of Bank of Ireland in the 1990s.

“Often described as a central architect to the global success of the now Smurfit Kappa Group, Howard’s assured leadership and dynamic vision played a key role in promoting Ireland internationally as a place to do business as our national enterprise model went from strength to strength,” Ibec chief executive Danny McCoy.

“He leaves behind a legacy of professionalising, modernising and internationalising Irish business.”

From Dublin, Mr Kilroy was born in 1936, the same year as the business figure with whom he became most closely associated, Michael Smurfit.

An accountant by profession, Mr Kilroy joined what was then the Jefferson Smurfit Group as financial controller in 1973, working alongside Mr Smurfit and his brothers.

He was promoted two years later to financial director, joining its board, and he remained at the heart of the company as it expanded beyond Ireland and Britain to the US and emerging markets.

He became chief operations director of the fast-growing packaging empire in 1978 and added the title president in 1986.

When Michael Smurfit retired as Smurfit Kappa chairman in 2007, he said he “could not have succeeded” without Mr Kilroy and that he had been “extremely lucky” to work with him.

Mr Kilroy served as governor of Bank of Ireland’s court of directors for nine years from 1991 until 2000. His non-executive roles included a spell as chairman of Waterford Glass and a non-executive director at cement giant CRH and retailer Arnotts.

Mr Kilroy described the role of being an accountant to a Leinster Society of Chartered Accountants lunch in 1979 as “one whose eyes are fixed firmly on the past as he backs confidently into the future”.