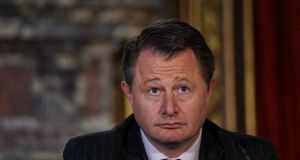 John Hourican, chief executive officer of Bank of Cyprus, has been asked to stay on at the bank until the end of 2018. Photographer: Misha Friedman/Bloomberg

Ireland’s John Hourican became chief executive of the Bank of Cyprus group following the country’s March 2013 bank crisis and economic melt-down. That October he took over a “broken bank”. He recently committed to staying on until the end of 2018 in order to see the job through. His decision scuppered rumours of a potential candidacy to succeed Richie Boucher as chief executive of Bank of Ireland.

His time with the Cypriot bank has involved rebuilding the institution following a national debt crisis on the island.

Speaking to The Irish Times he describes the Bank of Cyprus as the largest bank in the republic which is “a sovereign country with an economy of a city state.”

Four years ago the bank was in a “precarious and dangerous situation, its problems had been warehoused” and the economy was in dire straits. The Cyprus job “involved bringing together two separate banks” – former competitors. The Laiki (Popular) Bank, the second largest, had to be wound down. The Bank of Cyprus took over staff and assets and administered Laiki debts. Thirty-five per cent of the workforce had to be cut and 200 branches closed. The Bank of Cyprus, which suffered from exposure to Greek and Romanian crises, had to sell off banks in Russia and Ukraine as well as hedge funds.

The most painful and controversial aspect of the recapitalisation of the Bank of Cyprus was the “haircut” deal struck with the Troika – the European Central Bank, the European Commission and the International Monetary Fund – to convert into shares 47.5 per cent of deposits above the insured €100,000 level. Although Mr Hourican said only five per cent of depositors had been affected, the “haircut” dealt a hard blow to Cyprus.

He is critical of the so-called “bail in”.

He says the EU should have “protected Cyprus. Larger nations should not have treated Cyprus as an experiment.” Troubled banks in other European countries – he gives the example of Portugal – have not been dealt with in this way.

He reckons depositors cannot expect, even in the long term, to reclaim their converted funds, valued at present at 15 per cent.

To make his job more difficult, these existential tasks had to be performed at the same time in order to create public confidence in the bank and the economy.

“The Bank of Cyprus is now stable,” says Mr Hourican. The €11.4 billion in emergency funding received by Cyprus has been “repaid in entirety”.

“The ratio of loans to deposits has improved from 150 to 95. The bank is, therefore, better off than the European average,” he says.

Deposits rose by 16 per cent during 2016, the bank registered modest profitability of €64 million and the bank leant €1 billion. Meanwhile, the Cyprus economy grew by 2.8 per cent last year, compared with 1.7 per cent in 2015.

During the process of recapitalisation and afterwards the bank has had to tackle non-performing loans. While they have been “reduced every quarter, there is still a mountain left” he says.

The Cypriot custom was to take out loans and “expect children or taxpayers to pay”. To ease the pressure, the bank has introduced property swaps to pay off loans.

The situation in Cyprus cannot be compared with Greece. Like Ireland, Mr Hourican said, Cyprus has inherited laws and a stable civil service from the former British colonial administration.

“Haris Georgiades is a first class finance minister who knows we must keep up the pace [of reform] so the agenda does not slip backward. Parliament made the right decisions [although they were] sometimes weaker than we would have liked.”

Mr Hourican dismissed reports in the US press about a connection between the Bank of Cyprus and Paul Manafort, US president Donald Trump’s former campaign manager who has been accused of laundering Russian funds. Mr Manafort’s business with Laiki Bank was terminated before that bank was merged with the Bank of Cyprus.

He says Cyprus strictly regulates depositors. It operates to UK standards and abides by regulations set by the US Patriot Act and other international instruments. The Bank of Cyprus is modernising, adopting digital technologies, courting customer loyalty.

On Britain’s EU exit, Mr Hourican said the 1.2 million tourists who normally visit Cyprus will find it more expensive due to the fall in the value of sterling. “Cyprus should join with Ireland and adopt a loud voice in the EU to protect their interests... and the future of Europe. ”

During his time here, he has found Cypriots to be very much like Irish people. Ireland and Cyprus have a “similar kaleidoscope: British occupation, division, and migration”, he observes. Both “are bilingual and at the edge of Europe.” The similarities of Ireland and Cyprus and fellow feeling may have made it possible for Mr Hourican to preside over painful recapitalisation and restructuring of the Bank of Cyprus, the essential economic institution of this island. A Dutch chief executive at the Hellenic Bank did not survive for long, a Cypriot banker told The Irish Times. Mr Hourican has been asked to stay on until the end of 2018 in order to see the job through.