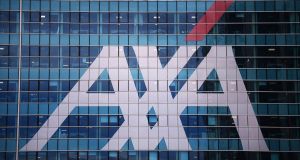 Axa has about 600,000 motor policies, 30 per cent of the total market in the Republic. Photograph: Marco Bertorello

Liberty Insurance joined Axa in setting out the rebate its customers will get, saying that it would set aside €5 million. However, Liberty customers will have to contact the insurer directly to receive the rebate, otherwise the money will got to charity.

On Monday, Axa told The Irish Times it would set aside up to €20 million to offer its customers a rebate as a result of fewer claims associated with the nationwide shutdown caused by the Covid-19 pandemic.

The Axa provision equates to about €33 for each motor policy.

Liberty declined to detail its market share, thereby making it difficult to establish how much each customer stands to gain. One source suggested the company had a roughly 10 per cent market share, equating to 200,000 motor policies. On that basis customers would receive a €25 rebate.

While Liberty wouldn’t confirm its market share, it noted the example of a policy holder paying €600 a year for motor insurance who would stand to receive a €15 rebate. However, Liberty will not automatically return this to their clients, who will have to contact the insurer to get the refund.

In the event that clients don’t contact them, Liberty said the money would go to charity.

Liberty said its customers will be able to claim from June 8th and will receive a “cash equivalent voucher”. While a spokesman could not detail what form this voucher would take, it is understood that it could come in the form of a one for all voucher or something similar. The refund will not be paid in cash, the spokesman clarified.

AA Ireland director of consumer affairs Conor Faughnan said that its customers will benefit from the rebates where underwriters offer such rebates. The AA uses Allianz, Axa and Aviva to underwrite its policies. “Whenever an underwriter provides a rebate we’ll hand it straight to you but when they don’t, we can’t,” Mr Faughnan said in reference to Aviva, which isn’t offering rebates. “To be fair to them, it’s difficult to know what you’re claims experience is going to be until it matures,” he said.

Axa has about 600,000 motor policies, 30 per cent of the total market in the Republic, which is comprised of more than two million policies.

On Friday, sources in the insurance market suggested that an announcement by five insurers – Axa, Allianz, FBD, RSA and Zurich – to return funds to their motor customers would cost about €37.5 million in refunds and discounts.

But given the scale of Axa’s provision, that could now rise to as high as €50 million for that grouping. It had been anticipated that the insurers – most of which have British parents – will look to the example there where insurer Admiral said it would provide a £25 (€28.55) rebate.

It noted that the insurers, which cover 75 per cent of the market, would review the situation if Covid-19 restrictions on movement resulted in sustained lower road usage and claims frequency for the summer and beyond.