Expected credit losses swelled to $3bn in first quarter, and could rise to $11bn this year 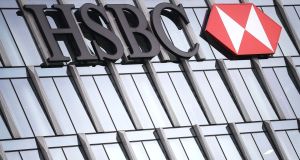 Delivering his first quarterly results as the permanent chief executive, Noel Quinn’s plan to boost profitability at Europe’s biggest lender is being curtailed by the virus outbreak. Photograph: Marco Bertorello/AFP via Getty

HSBC Holdings took its biggest charge for bad debts in almost nine years and warned of deepening loan losses as it pushes back parts of its restructuring programme.

Expected credit losses swelled to $3 billion (€2.8 billion) in the first quarter, almost double estimates, and could rise to as high as $11 billion this year, the lender said yesterday. Adjusted pretax profit missed a consensus estimate collected by HSBC.

Delivering his first quarterly results as the permanent chief executive, Noel Quinn’s plan to boost profitability at Europe’s biggest lender is being curtailed by the virus outbreak that has also shaken his competitors around the world.

At the behest of UK regulators, London-based, Asia-focused HSBC has cancelled its dividend, angering key investors in Hong Kong and sending its shares down to an 11-year low this month.

Mr Quinn has been forced to delay key parts of a restructuring programme announced in February, which included about 35,000 job cuts, combining business areas and an accelerated shift to Asia to lift profits.

The bank’s medium-term financial targets will be assessed during the year, it said. The dividend will be reviewed “at, or ahead of, our year-end results for 2020.” - Bloomberg