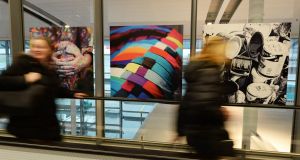 Passengers travelling through Dublin Airport. The aviation regulator has reduced passenger charges at the airport for the next five years, a decision that could be appealed this month. Photograph: Cyril Byrne / The Irish Times

Sales of new fully-electric cars rose by 11 per cent during the first few days of 2020, though they still represent only 2.4 per cent of the total Irish new car market with 322 registrations. Michael McAleer examines the numbers.

Time is running out for anyone seeking to challenge a controversial ruling by regulators to cut Dublin Airport’s passenger charges to €7.87 a-head. A deadline of January 24th has been set by the Department of Transport. Barry O’Halloran has the details.

Troubled Irish oil and gas explorer Providence Resources appointed a new chief executive. In Cantillon’s view, Alan Linn has just one goal - to get the Barryroe oil prospect off the coast of Cork over the line.

In our personal finance feature, Brian Hutton looks at how switching your mortgage can yield major savings.

In her media and marketing column, Laura Slattery looks at the likely leaders debates on television in the upcoming general election. The key lesson from history for Leo Varadkar and Michael Martin is not to do a Richard Nixon, who sweated his way through a TV debate with John F Kennedy in 1960.