Budget cuts to USC would be ‘profoundly unfair’ on lower-income workers, says study 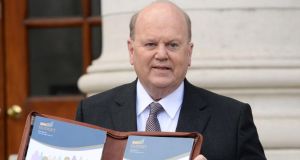 Minister for Finance Michael Noonan: “We want the gains to be proportionate.” Photograph: Eric Luke

Proposed changes to the universal social charge (USC) would disproportionately favour higher earners and could be “profoundly unfair” on lower-income workers, a new study said on Monday.

According to Social Justice Ireland (SJI), changing the income taxation system through the elimination of the first three rates of the USC “is an expensive and unfair policy path”.

“Some tax proposals currently being considered by Government should be rejected because they would give far greater benefit to people earning higher incomes than to lower-income employees” said SJI director Seán Healy, who argued that the impact of some of the proposals could be “profoundly unfair” on lower income workers..

The study considers the impact of the following changes to the USC:

According to SJI, the total cost of these changes would be €2,742 million in a full tax year – or almost 14 per cent of the expected income taxation yield in 2016. But the gains, it says, are “ heavily skewed” towards those on the highest incomes.

However, while cuts to USC have been signalled, Minister for Finance Michael Noonan previously said: “We want everyone on an income to gain from this. But we want the gains to be proportionate.”

The elimination of the PAYE credit – worth €1,650 a year – for those on higher incomes is seen as one of the key ways to take back some of the gains from the better off.