Demand increases by 2.9 per cent, nearly twice as much as predicted by economists 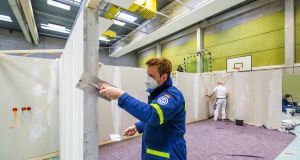 German factory orders rose for a sixth month in October and surpassed pre-crisis levels, in a sign of the manufacturing sector’s growing resilience to the pandemic. Demand rose 2.9 per cent, nearly twice as much as predicted by economists. The economy ministry said the gain was led by investment goods, which were particularly well-sought outside the euro area. As a result, orders for machinery rose some 5 per cent above levels recorded in the fourth quarter of last year. Germany has benefited from a relatively large manufacturing sector that has adapted to the crisis to keep producing goods.

Government-imposed curbs across the euro zone to stop the coronavirus spreading have fallen more heavily on services, slamming nations more reliant on activities such as tourism and leisure. Still, Germany has extended its own restrictions into 2021.

Even before that decision, the Bundesbank warned the economy could stagnate or even shrink in the final three months of the year. The European Central Bank is poised to boost its emergency monetary stimulus next week to help support the regional economy until vaccines are widely rolled out and a recovery looks more robust. - Reuters