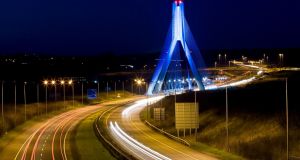 The Boyne Valley bridge on the M1. The rise in new export orders for the North’s firms in March was driven by business with the Republic

Ulster Bank’s Northern Ireland PMI report shows new export business increased at “a marked and accelerated pace” during March, with firms attributing “strong growth in the Republic of Ireland” as the main factor.

Overall Ulster Bank’s figures on March shows that although both output and new orders grew in the North, it was at a weaker rate than the previous month.

Growth slowed across the manufacturing, service, construction and retail sectors in Northern Ireland last month, but the report also shows that firms still managed to create new jobs at a faster rate in March than February because of the strong rise in export orders.

Richard Ramsey, Ulster Bank’s chief economist in Northern Ireland, believes the latest report highlights that although the first quarter of the year may have been a better period than had originally been anticipated, local firms still took a battering from the “Beast from the East” which impacted on their overall trading results.

“Almost all regions of the UK experienced a slowdown last month, driven at least in part by the weather conditions, with Northern Ireland output and new orders easing to eight-month and 17-month lows respectively, with the services sector the worst hit.

“However, the one-off weather factor makes it difficult to ascertain to what extent this is a blip that will be reversed in April or something more fundamental.”

Mr Ramsey also warned that although inflationary pressures – outside of retail – eased last month, they remained high, chiefly because of staff costs and the continued weakness of sterling.

But he added: “Interestingly, firms remain relatively optimistic about the year ahead, albeit that Northern Ireland’s private sector is the least optimistic of all the UK regions for the third month running. Political uncertainty, though, is one risk firms have cited that could hamper growth prospects in the months ahead.”

Separately, another new report shows there has been another fall in the number of people shopping. Overall shopper footfall fell last month by 1.8 per cent in the North, according to the Northern Ireland Retail Consortium (NIRC).

Aodhán Connolly, director of NIRC, said in general footfall fell across the UK by 6 per cent.

“Whilst the drop in shopper footfall in Northern Ireland last month was barely a third of that witnessed across the UK as a whole, this is hardly a cause for celebration. For 11 out of the past 12 months we have seen a continued decline in footfall in our retail destinations, and it’s notable that even the important Easter shopping period failed to bring a return of footfall growth.

“This is despite the acceleration of shop price deflation in March to its lowest rate for a year. As the impact of the pound’s depreciation is fizzling out and the inflation/wage growth gap is finally narrowing, the pressure on consumers’ budgets is beginning to ease.”