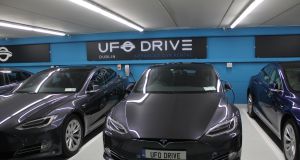 UFODrive began offering an all-electric fleet in Dublin in April

UFODrive, which was co-founded by Irishman Aidan McClean, began offering an all-electric fleet in Dublin in April targeting business and frequent travellers, along with those living in the city.

The company, which also operates in Luxembourg, Brussels, Amsterdam, The Hague, Rotterdam, Paris, Vienna, Hamburg and Cologne, offers a number of electric vehicles for hire, including Tesla, Hyundai, Audi and Jaguar models. Prices vary depending on model, but a Tesla Model S day rental costs €149.

BVP has invested €1 million in the car rental business via the State’s employment and investment incentive scheme (EIIS), which allows small investors to claim tax relief on investments in emerging companies.

The company, which is an investor in green and SME businesses, has completed over €9 million of equity and Green Bond investments this year. Among the other Irish companies it has backed this year are HealthBeacon, Tandem HR, Buymie and Bleeper Bike.

Mr Griffin said BVP is on target to raise a further €5 million in the coming weeks which will be used to back other start-ups.

“We have a pipeline of really exciting businesses which we are in discussions with and we expect to close out some very positive deals in the early months of 2020,” he said.

BVP investors typically commit to a four to seven year timeframe for investors.