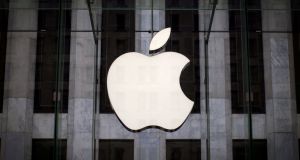 Apple store on Fifth Avenue in Manhattan: the Department of Finance said it and Apple had agreed to seek the services of custodian and investment managers to oversee Apple’s contested multibillion-euro Irish tax bill. Photograph: Mike Segar

Investment managers and custodians vying to handle Apple’s contested multibillion-euro Irish tax bill, as the State appeals a European Commission ruling that the money is owed in the first place, stand to make up to €15 million a year, according to senior fund industry sources.

The Department of Finance said on Saturday that it and Apple had agreed to seek the services of custodian and investment managers to oversee the money.

The funds will be held in escrow as both parties appeal the original EU decision from August 2016 that the iPhone maker received €13 billion in illegal state aid in the decade to 2014. The appeals process may take between four and six years.

The National Treasury Management Agency (NTMA) is handling the procurement of a custodian, which will safeguard the money on behalf of Minister for Finance Paschal Donohoe, as it is held in escrow and managed by an investment manager.

“It is intended that the fund will be denominated in euro and will be invested in low-risk assets (primarily fixed-income instruments) with the principal investment objective being to preserve capital to the extent possible in light of prevailing market conditions,” according to procurement documents published on Monday through the EU tendering process.

The successful custodian must have had at least €3 trillion of assets under custody in each of the past three financial years and been in charge of at least €500 billion of fixed-income assets, such as bonds or other debt investments.

The hiring of a custodian is expected to conclude in the middle of November, according to the documents. This indicates that it will be the end of 2017 before the Republic will start collecting the money from Apple, long after an initial deadline in early January was missed.

The department estimates that it will need to collect between €13 billion and €15 billion from Apple, including interest, pending the outcome of the appeals process.

The Government is exempt under EU laws from having to hold an EU procurement process for actual investment managers to run the day-to-day activities of the fund.

However, the department has said “in order to secure value for money, a competitive tender process will be undertaken” outside the scope of the EU public procurement rules.

The terms of this process are currently being agreed between Mr Donohoe and Apple.

Fund industry sources said on Monday that the successful custodian could generate annual fees equating to 0.03 percentage points of the funds that will be held in escrow.

The successful investment managers could expect to receive an average of up to 0.07 per cent of the assets, they said, assuming that the funds will be subject to a mix of active and passive management.

On that basis, the combined charges could amount to €15 million a year, or 0.1 per cent of the upper end of the department’s range of the amount that must be collected from Apple.

A spokesman for the NTMA declined to comment, while a spokesman for Apple didn’t respond to a request for comment by the time of going to print.

A spokesman for the US technology giant said on Saturday that the European Commission’s “case against Ireland has never been about how much Apple pays in taxes” but about which government gets the money.

“Since virtually all of our research and development takes place in the United States, according to the law, we pay the majority of our taxes in the US,” he said. “The commission’s ruling is contrary to the tax principles countries around the world have adhered to for decades.”