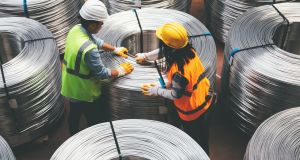 Raw material prices, and particularly that of steel, increased in March. Photograph: iStock

Brexit is continuing to cause Irish construction managers to stockpile goods, although its impact on sentiment in the sector is less marked as job creation quickened in March to the fastest pace since October.

According to AIB’s Purchasing Managers Index (PMI) softer increases in output and new work caused growth in the sector to ease in March, however, the rate of job creation increased from February.

While business conditions have vastly improved over the past six years, the adjusted PMI headline figure dipped slightly, “but still signalled solid improvements”.

“The AIB Irish manufacturing PMI for March at 53.9 was little changed from its level in February of 54.0,” said AIB chief economist Oliver Mangan.

“The Irish reading is well above the flash March manufacturing PMI for the Euro zone, which sank to 47.6, its lowest level in nearly six years, and well below the key 50 level that separates expansion from contraction.”

As was evident in February, managers were building inventory to mitigate supply disruptions and that accumulation was supported by a rise in purchasing activity.

Softer increases in output and new business underpinned the slower improvement with the rate of overall new order growth dipping slightly from February. However, new business from abroad increased at the fastest pace in four months, amid evidence of greater demands from UK companies.

In contrast to the slower increase in output, employment growth increased to the fastest in some months as a result of companies attempting to fulfil customer demand and bolster their productivity capacity.

Cost burdens also increased in the month as a result of rising raw material prices, including for steel.

“Overall, the continued strength of the Irish manufacturing PMI is very notable given the loss of momentum in the sector globally in recent months, especially in Europe. It augurs well for the growth prospects of the Irish economy this year,” Mr Mangan added.