Funds need to transfer between one generation and another, IMF chief says in Davos 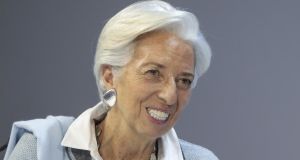 The International Monetary Fund’s managing director, Christine Lagarde, signalled on Wednesday she would be in favour of wealth taxes being used to help narrow the yawning income gap between the young and old across Europe.

Speaking at the World Economic Forum annual conference in Davos, Ms Lagarde, a former French minister for finance, said politicians tended to push through policies helping the elderly, as younger people were typically less inclined to vote. A new report published by the IMF has found that austerity measures introduced across the continent in the wake of the financial crisis have exacerbated the generational divergence.

While the incomes of working-age European have stagnated since the crisis, those of the elderly have risen by 10 per cent, according to the report. While youth unemployment spiked at 25 per cent in 2013 across Europe, one in five in this category is still looking for work. Ms Lagarde highlighted that the Brexit referendum outcome was an example of the “generational divide”, when the decision to exit the European Union was carried by older voters.

Ms Lagarde called for tax and labour-market reforms, lightening the burden on companies to employ younger people, to narrow the gap. A wealth tax would serve as a mechanism to transfer funds from one generation to the other, she said.

“Any finance minister is going to first of all think about the efficiency of collecting revenue and serving a budget that is going to be sustainable and healthy,” said Ms Lagarde. “But the second aspect of taxation is also redistribution.”

She said there was little incentive for young people to be participants in modern democracies “if they have the certainty that their dreams will be deferred at best, buried at worst”.