Is extreme weather in our business forecast?

Cantillon: Should State money be ploughed into protection against snow and floods? 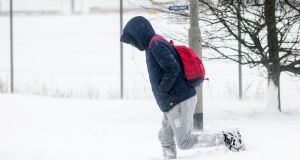 This week’s weather has given us plenty to talk about, and when the Beast from the East has passed, the businesses left counting the cost will no doubt have something to say too.

Business group Dublin Town estimates that the weather has cost traders in the capital €15 million. Coincidentally, this week insurer FBD confirmed that it paid out €10 million for claims resulting from September’s Storm Ophelia, although reinsurers covered €5 million of this.

That is two episodes of extreme weather in less than six months. The last heavy bout of snow that Ireland endured was seven years ago in the winter of 2010/11. That seems long enough, until it is judged on the basis that this country has a moderate climate, where these events should occur only rarely. Then it is actually quite a short period.

Between that winter and this, there were plenty of storms and floods that appeared to cause exceptional damage. All this has led to a debate over whether or not extreme weather is going to be something with which we will have to live from now on.

There are, no doubt, people on both sides of that debate with axes to grind and who are thus less than neutral in the discussion. Nevertheless, perhaps it is time for the State to begin looking at this question and considering whether it makes sense to invest in infrastructure and equipment that would leave the nation better able to cope with these events.

Like any such investment, the State would have to weigh the cost of any measures against the real – rather than hyped – risk of extreme weather and the size of the bills it is likely to leave in its wake.

In other words, it would not be wise to buy a fleet of snowploughs if the probability of another beast visiting us in the next few years is infinitesimally low. On the other hand, if there is real evidence that something similar could occur within a short time, then we should be prepared.

And evidence will be the crunch for anyone who has to decide this. They will not only have to gather and sift it, they will also need to be sure that it is reliable and agenda free.

About Cantillon: A man with a profound understanding of how money is made and lost, Kerry-born economist Richard Cantillon (1680s-1734) is a fitting namesake for this long-running column. Since 2009, Cantillon delivers succinct business comment on the stories behind the news.