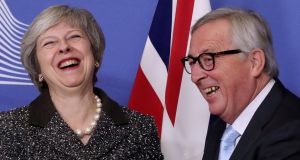 Image of the week: Tension relief

Even by standards of the Brexit calendar, Tuesday was a high-level charade as Theresa May – still UK prime minister at the time of writing – did a whistle-stop tour of Europe. First she dropped in on the Hague to meet Dutch prime minister Mark Rutte, then it was on to Berlin for a catch-up with German chancellor Angela Merkel (once the car door eventually opened) and then it was final destination Brussels, where she and European Commission president Jean-Claude Juncker share a moment of levity in front of the cameras. The Dublin stop on this farewell tour of the EU was then cancelled as she turned her attention to a time-wasting leadership challenge. But what could Rutte or Merkel or Juncker possibly say that would get May out of her political conundrum? Nothing. The “cakeist” (having-your-cake-and-eating-it approach) to Brexit remains rife in Westminster.

Number of dislikes that YouTube’s “Rewind 2018”, billed as “the videos, music and trends that defined YouTube in 2018”, has attracted at the time of writing after prominent YouTubers turned on it.

The record it is on track to beat is/was held by the video for Justin Bieber’s song Baby, which has been racking up the dislikes since 2010.

Dislikes garnered by the video for Ed Sheeran’s Shape of You, which as of this week has surpassed two billion streams on Spotify. You lose some, you win even more.

Vipassana is an ancient form of meditation that has been dragged into a unholy controversy, generated last weekend by Twitter chief executive Jack Dorsey, who spewed an 18-tweet thread on how brilliant he found a 10-day Vipassana meditation retreat in which he had “no devices” but nevertheless managed to monitor his vitals with Apple Watch and an Oura Ring (“both in airplane mode”). So far, so tech bro. The problem was Dorsey was on this wonderful jaunt in genocide-afflicted Myanmar, and he finished his thread with the advice that people “willing to travel a bit” for a retreat that promises no eye contact for 10 days should “go to Myanmar”. Not even the widespread criticism of rival Facebook’s role in accelerating the deaths and ethnic cleansing of the Muslim Rohingya people was enough to make this reality impinge on his consciousness as he waxed lyrical about what its tourist offerings could do for his heart rate. Three days later, an update: “I’m aware of the human rights atrocities and suffering in Myanmar ... need to learn more … purely personal trip for me.”

Getting to know: Zoe Lofgren

Zoe Lofgren is a US Democrat who represents part of California in the House of Representatives. This week she had a clever question about an idiot. Specifically she wanted to take the opportunity to inquire of Google chief executive Sundar Pichai why, when she googled the word “idiot”, the image results were full of pictures of Donald Trump. “How would that happen?” she wondered innocently. Yes, how could that possibly be? The Google boss, in Washington to address allegations of political bias, declined the obvious if facetious answer and explained that the results were based on billions of keywords ranked according to more than 200 factors including relevance and popularity. “So it’s not some little man sitting behind the curtain figuring out what we’re going to show the user?” Lofgren mused rhetorically. Ever since this testimony, the word “idiot” in the context of Trump and Lofgren’s question has shot up the US search charts – accompanied by a picture of him, naturally – which seems like a good day’s work for a Democrat.

“What is blasphemy?” may have been the most popular Google “what is?” search term in Ireland and “how to register to vote” the most common “how to” in 2018, but many of the most frequent searches this year had a business theme.

1. What is bitcoin? This was second in the Irish list and first in the UK’s “what is?” list. A bit of a scam is the short answer.

2. What is the backstop? This was third in the Irish list, but didn’t make the UK top 10, which says it all.

3. How to delete Instagram. Some people have just had enough of Insta-madness, judging from the fifth-placed “how to” question in the UK list.

4. How to delete Facebook. The sixth-placed “how to” in the UK’s most common Google searches is not much of a surprise given the year it has had.

5. How to get old Snapchat back: in fifth spot in Ireland (just behind the all-important “how to make eggs”) and fourth in the UK. People really hate the new Snapchat.