Have we missed our chance to fix the housing crisis?

Cantillon: Boosting supply of houses would have wider implications for the economy 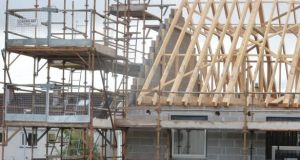 The Irish Fiscal Advisory Council has warned that although a sudden upsurge in house construction may be “necessary”, it would also be problematic in that it could spark “over-heating”. Photograph: Alan Betson

Estate agent Savills published a comprehensive overview of the rental market, on Monday, revealing how the vacancy rate in the capital is “razor thin” at a little more than 1 per cent. According to Daft.ie, Blanchardstown – an area with a population of some 75,000 people – currently has just 13 properties for rent, and three of these are short-term lets only. Dublin city as a whole has fewer than 1,400 properties to let.

A normal functioning market would have a vacancy rate of about 5.6 per cent, Savills says, which shows just how far off we are. Until the vacancy rate reaches this level – something that is “years” away, the author of the report says – demand will continue to outstrip supply.

This can only mean one thing – rising rents. But can the market, can renters, take much more?

The report points to the human cost of the crisis already, with even those in decent jobs unable to stomach continued rent rises in urban areas, leading some to turn to “commuting to rent”. Where once people sacrificed afterwork drinks to own their own home in Navan or Naas, now they’re doing so just to rent.

The solution, espoused by author John McCartney, is boosting supply. However, a rapid increase in housebuilding would have wider implications for the economy – and ones which may not be that palable either.

Last week, the Irish Fiscal Advisory Council warned that although a sudden upsurge in house construction may be “necessary”, it would also be problematic in that it could spark that dreaded word – “over-heating” – by bidding up wages and eroding competitiveness, much the same as what happened in the years prior to the crash.

To counter this, the fiscal council says, Government would need to cool the economy, possibly by ramping up personal income taxes to quell demand.

So have we left it too late to solve the housing crisis without causing knock-on effects? And is the cost of dampening house price and rental growth inevitably higher taxes?