Schemes do not make homes more affordable; they just bridge the affordability gap 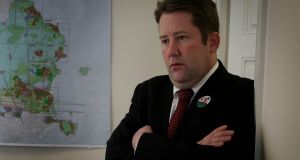 Minister for Housing Darragh O’Brien has pledged to provide an additional 50,000 social-housing units over the next five years. Photograph: David Sleator

No one could sensibly accuse the current Fianna Fáil front bench of being anything like the clique that ruled the roost back in the 2000s. The party has spent 10 long years in the sin bin for that period of misrule, enough time for some serious soul searching. Now it’s back in power with a new team and new policies.

But it’s questionable whether its thinking on housing, the mini cyclone that blows back and forth across the Irish economy, has changed that much.

In interviews last week, Darragh O’Brien, the party’s new Minister for Housing, made the right noises about wanting “to get affordability into the system” and pledging to provide an additional 50,000 social-housing units over the next five years.

O’Brien has been at the sharp end of the State’s recalcitrant housing market himself, having bought a property in 2006, at the tail end of the Celtic Tiger, only to find himself in negative equity a few years later.

But the proposals he and the Government are putting forward to address the problem bear a remarkable similarity to boom-time housing policies, ones that never really got at the central problem – that people on reasonably good incomes cannot afford to buy homes.

Take the Government’s new affordable-home purchase scheme, due to be launched in September. Like its predecessors, the initiative is aimed at people who do not earn enough to qualify for a mortgage but receive a big enough salary to disqualify them from social housing. While details are hazy, the State is likely to take some sort of equity share in the property.

O’Brien, who has pitched the scheme as a top priority for Government, plans to raise qualifying salary thresholds from €50,000 for an individual and €75,000 for a couple. This, he hopes, will get thousands more on the property ladder.

These schemes do not make homes more affordable but bridge the affordability gap. There’s a crucial difference here. One reconfigures the market, the other upholds it.

Shared-ownership schemes are a risky proposition for the State. Back in 2009, when property values crashed, affordable homes had no buyers because housing on the open market was cheaper. A significant number were left unsold and had to be funnelled back into the State system as social housing units.

More than 40 per cent of buyers on previous affordable-housing schemes defaulted or fell into negative equity during the crash. Hundreds of millions in loan arrears now sit on the State’s balance sheet as a result.

The problem with many of these Government initiatives is that they are politically rather than economically motivated – band-aids for financially stretched first-time buyers, which play well with a certain cohort of voters, but stay well clear of getting at the root causes of overpriced housing.

A major State intervention in the housing market to address affordability would have consequences for home owners and banks – the value of their assets may go down. This is perhaps why we have this constant tinkering around the edges without major policy change.

O’Brien also wants to double the percentage of social-housing units a developer has to set aside to 20 per cent. He says he will draft legislation in the coming months to expand the current Part V provisions in the planning laws.

Ironically, 20 per cent would bring the rate back up to the level set out in the original 2000 legislation.

Back then, Fianna Fáil, under intense lobbying from the industry, altered the legislation to allow developers buy their way out of the obligation.

In 2015, the legislation was overhauled. The affordable-housing provision was removed and social housing reduced to 10 per cent, albeit with no buy-out option. Part V provided 23 per cent of the State’s social housing new builds last year. Bringing the obligation up to 20 per cent is a positive.

But local authorities appear to be paying astronomical prices, particularly in areas of high demand, for what should be substantially discounted housing units. The most high-profile example is the Cairn Homes development of the former RTÉ site at Donnybrook in Dublin 4.

Cairn has agreed in principle a €30.2 million deal to sell 61 apartments to Dublin City Council for social housing. That values two-bedroom apartments at €521,377 and one -bed units at €472,797.

This isn’t a good financial deal for the State, not when the average cost of building housing units on State-owned lands is significantly lower. Would it not have made more sense for the State to withhold 10 per cent of the site and build the units itself?

O’Brien is energetic about his brief and plans to launch a housing task force and chair it himself every Monday morning. But he needs new ideas if he wants to make his mark.