Investors who hold treasury bills will pay Government for doing so 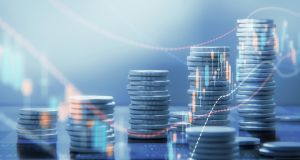 The Government has raised €500 million in 11-month borrowings at an interest rate of minus 0.54 per cent. Photograph: iStock

The Government has raised €500 million in 11-month borrowings at an interest rate of minus 0.54 per cent, a record low for such funding.

The National Treasury Management Agency announced that the money was raised on Thursday morning via an auction of treasury bills to investors.

The low interest rate sees investors who hold the bills to maturity paying the Government for doing so. The bills mature on June 22nd, 2020.

The minus 0.54 per cent rate is the lowest on record, surpassing the previous record low of minus 0.53 per cent achieved in a treasury bill auction in March 2018.

The NTMA said that for the latest loans it had received bids amounting to €1.525 billion – 3.05 times the target amount.

The low interest rates have offered significant advantages for the State in raising borrowings to refinance maturing loans. In June the NTMA raised €1 billion in 10-year borrowings at a rate of just under 0.3 per cent.

1 Flights abroad ban could last all summer
2 Economic self-harm is at the root of populism
3 Brexit: System agreed for Irish goods to skip checks on UK trade
4 Why are markets booming when a crash is on the way?
5 How much do Irish people earn? And what will Covid-19 do to our wages?
6 Columbia Sportswear defies gloom with first Irish standalone shop
7 Nine more suing INM and Leslie Buckley over alleged data hacking
8 What is the truth about paying tax in Ireland?
9 Stocktake: Playing poker with the day traders
10 Indoor vertical farming is the future says Irish agritech start-up
Real news has value SUBSCRIBE